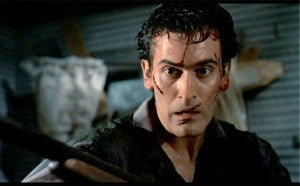 Filmmaker Sam Raimi, whose Evil Dead trilogy is currently being rebooted by Sony, has taken a rather unique step: he's moving forward with a sequel set in the original trilogy's continuity even while the reboot is ongoing. "I would love to make Evil Dead 4. My brother and I plan to work on the script this summer," Walt Disney Studios quoted Raimi as saying at a press event today for Oz, the Great and Powerful, his new film out next week. That brother would be Ivan Raimi, who worked on the screenplays for Army of Darkness and Darkman. Raimi has maintained over the years that he wanted to return to the franchise, but waived his rights to make the film a while back and authorized a remakeby Sony. Shortly after that, though, Award Pictures sought to make the film without him and he sued, saying that such a film would interfere with his own plans to make a fourth Evil Dead.

This Free Guy Scene Took Over One Year to Make