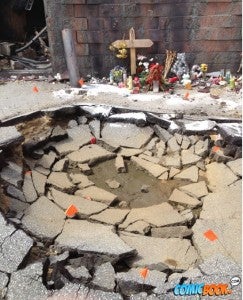 Iron Man 3 will kick off the 2013 summer movie season, when it is released on May 3. With viewers still pumped up over The Avengers, we're expecting that Iron Man 3 will have the biggest opening ever for an Iron Man movie. Comicbook.com has been keeping fans up to date on all the latest news and info from the Iron Man 3 set with numerous exclusive photos. We've also compiled together a list of the top five rumors about Iron Man 3. 5. War Machine Will Become Iron Patriot – In a media panel at Comic-Con, Don Cheadle confirmed that he will be wearing the Iron Patriot armor. What is still up in the air is whether he will actually be called Iron Patriot? Comicbook.com's sources near the production as well several recent trademarks filed by Marvel Entertainment indicate that Don Cheadle will become Iron Patriot in both armor and name. 4. The Mandarin Is The Main Villain – Comicbook.com was the first to report that The Mandarin would be the main villain in Iron Man 3. Others have disagreed and said that while The Mandarin will be a villain that he will be more of a behind-the-scenes villain. Iron Man 3 footage aired at Comic-Con confirmed that The Mandarin will indeed be in Iron Man 3, but it's still a rumor as to if he will be the main villain or not. 3. Guy Pearce's Role Is Just A Cameo – While it's yet to be officially confirmed who Guy Pearce will be playing in Iron Man 3, it is widely assumed that he will be playing Aldrich Killian. Just like with Ben Kingsley's role as The Mandarin, there is quite a bit of debate as to how large a role Guy Pearce will play in Iron Man 3. Pearce himself has described his role as just a cameo, but that could be just to throw fans off, as there has been speculation that he might even be the main villain. 2. Ant-Man Will Be Introduced – Marvel Studios is well known for using after the credits scenes to lay the groundwork for upcoming movies. What other movie could Iron Man 3 potentially set up? With Wang Xueqi reportedly going to play Chen Lu, who becomes the Radioactive Man, there is lots of speculation that he could tie into the introduction of Ant-Man in an after the credits scene. 1. There Are A Lot Of Villains – For awhile, it looked like there was a different villain being revealed for Iron Man 3 every week. In addition to The Mandarin and Aldrich Killian, it's been widely reported that both Firepower and Coldblood will be villains in the movie as well. Even though Wang Xueqi might be playing Chen Lu, it's unknown if he will actually turn into Radioactive Man during the course of the film. The terrorist groups A.I.M. and the Ten Rings are also rumored to play a role in the movie. One thing for certain is that it looks like Iron Man will have his hands full.