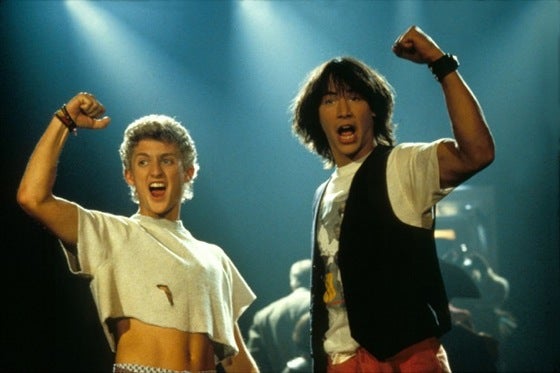 During a new interview promoting his film 47 Ronin, actor and filmmaker Keanu Reeves took some time out to tell Savannah Guthrie on Today about the progress on Bill & Ted 3. "I'm open to the idea of that," Reeves revealed during a Monday morning interview. "I think it's pretty surreal, playing Bill and Ted at 50. But we have a good story in that. You can see the life and joy in those characters, and I think the world can always use some life and joy." "Yeah, there's a story; there's a script," he said. "We're trying to get the dough together to make this crazy story." For all intents and purposes, he didn't tell the news magazine anything fans didn't already know--but certainly it's going to reach a whole new audience on Today. The last time we heard from the actors, the film had bounced back from the darkest point in its recent development and was moving forward with its original producers, but still needed to be rewritten to work within a realistic budget without losing any of the script's big ideas. "[Bill and Ted] do indeed evolve," he teased of the story, but he can't say more than that about the story they're trying to finance. "I can talk about it, but I shouldn't talk about it. But I could talk about it, but it's ... interesting." Bill and Ted's third film is hopefully coming along soon--writer Ed Solomon may be a bit busy, though, working on Amazing Spider-Man spinoffs at Sony.