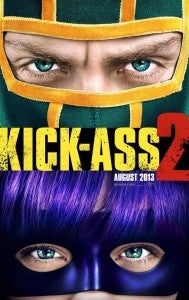 In addition to this morning's red band (age-restricted) trailer, Universal have released a new movie poster for their forthcoming comic book adaptation Kick-Ass 2. Created by Mark Millar and John Romita, Jr., Kick-Ass 2 actually adapts two comic book miniseries--Kick-Ass 2 and Hit Girl--in one feature film set to hit theaters in August. Kick-Ass 3 #1 comes out in May from Millarworld and will be the basis for a third and final installment of the film series.