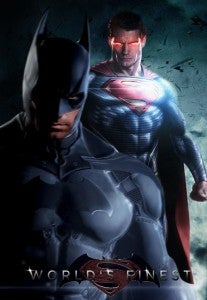 Stand-up comedian, actor and geek favorite Patton Oswalt has words for the 25,000+ people who signed the petition to remove Ben Affleck from Batman vs. Superman: Keep it off his Facebook wall. Oswalt posted a note to his Facebook wall this evening, telling fans that he felt Affleck is actually close to perfect to play Grant Morrison's Batman--deconstructed and rebuilt following the events of Arkham Asylum. And if you don't agree, at least have the decency to keep it off Oswalt's personal space, apparently. Here's the full remarks:

No matter how many times you post your stupid "Fire Ben Affleck from Playing Batman" petition, I'm going to delete it and block you. Take a deep breath, and think for a second: Yeah, the dude's made some bad films. Every actor has. Every actor does. Every actor will. It's a huge, arcing career and NO ONE has control over where it goes. Movie to movie, year to year, you're collaborating and trying and risking and, sometimes, yes -- failing. Plus, everyone seems to forget that he had the world dropped in his lap when he was YOUNG. And, judging by how other suddenly-famous youngsters do in the same situation, he fared pretty well. Even when it went wrong, he seemed to keep a self-deprecating, long-view philosophy about the burning freak carousel he'd found himself on. And then what happened? I mean, he'd fallen from a HEIGHT. You know what happens to 95% of people who weather a descent that steep? They come apart, fray at all of their sanity nodes, and give up. But then there's the 5% who embrace crushing defeat and see it for the gift it is. And here's the gift: when you fail, and fail UTTERLY, you wake up the next morning and see that the world didn't end. And then the fear of failure is gone. And you're free. You're free to proceed on your own terms and pace -- if you have the ego that permits you to. Ben brushed himself off, realized he'd kept his eyes open on the movies he'd done, and started directing. And he's become a damn good one. A Batman portrayed by someone who's tasted humiliation and a reversal of all personal valences -- kind of like Grant Morrison's "Zen warrior" version of Batman, post-ARKHAM ASYLUM, who was, in the words of Superman, "...the most dangerous man on the planet"? Think for a second and admit that Ben Affleck is closer to THAT top-shelf iteration of The Dark Knight than pretty much anyone in Hollywood right now. I'd write more, but I have to go work on my post about how an overweight 44 year-old comedian with bad feet and insomnia would be a bold choice for The Joker.

Patton Oswalt Will Block Batfleck Haters On Facebook--Also, He Wants to Be Joker