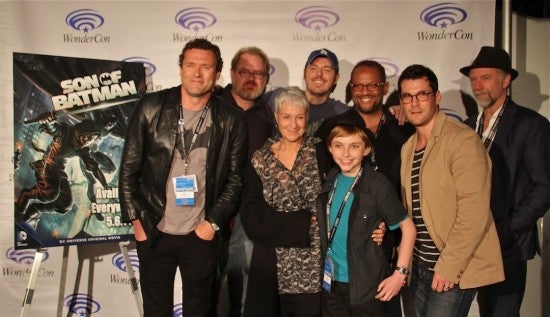 Ahead of the May 6 release of the movie on Blu-ray and DVD, Warner Bros. Home Entertainment have released a clip from Son of Batman, the animated feature film adaptation of Grant Morrison and Andy Kubert's Batman and Son story arc. In the clip, embedded below, you can see Batman's son Damian Wayne (played by Stuart Allan) facing off against Ubu (Bruce Thomas, who also voices Commissioner Gordon in the film). One of a number of animated projects being released this year in celebration of Batman's 75th anniversary, Son of Batman debuted last week at WonderCon, from where the image above originated. The home video release will include a ten-minute sneak peek at Batman: Assault on Arkham, the next DC Universe animated feature, which includes the Suicide Squad and is set in the world of Batman: Arkham Origins.