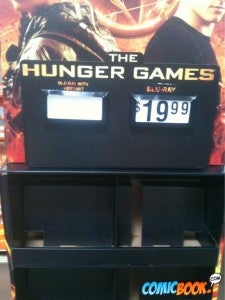 has been bringing you the story first all weekend that The Hunger Games DVD is experiencing phenomenal sales in retailers across the United States. Huge crowds showed up for Hunger Games midnight release parties across the nation on Friday night, and retailers were still reporting strong sales on Saturday. A clerk at one Wal-Mart store told us, "It's the fastest I've ever seen one of our DVDs sell." Many retailers we checked this morning are now completely sold out of the Hunger Games DVD. The Hunger Games retailer exclusive DVDs seemed to be the first to go with many stores only having standard Blu-ray copies remaining. Update: While Lionsgate has yet to put out an official press release, indications are that sales are going very well. There is a post on the official Hunger Games facebook page which says "The Hunger Games 7 million and counting." Because the number didn't refer to what it was talking about, some tweets and facebook posts as well as an earlier draft of this story speculated it could be referring to the DVD sales and or digital downloads. However, it appears as if the number is actually referring to the number of Hunger Games Facebook fans. According to The-Numbers.com, the current top selling DVD for 2012 is The Twilight Saga: Breaking Dawn Part 1 with 5.2 million copies sold. It's very possible that The Hunger Games could exceed this number and become the top selling DVD for 2012 in its first weekend of release.

also did some research on the fastest selling DVD of all time, and all the reports we've found seem to point to Avatar being the current record holder. Avatar sold 6.7 million DVDs and Blu-rays in its first four days of release, which seems to be within reach for The Hunger Games. As far as the best selling DVD of all time, Finding Nemo appears to still hold the record with reports from a couple years back putting the count at 40 million plus DVDs sold. While Finding Nemo is likely safe for now, with Hunger Games fans picking up multiple copies to get all the various exclusives that record might not even be safe for long.