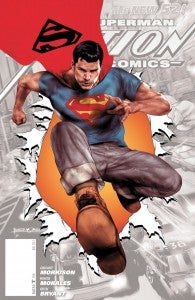 Just as it was a year ago, so is it today. Here at ComicBook.com, we wanted to take a look at DC Comics's The New 52, one year later (not to be confused with One Year Later, the event that took place following the DC Comics event called 52), to see how things look and whether these prequel stories really work as prequel stories to the 52 new #1 issues that rolled out last September (give or take, since some of these newly-released zero issues are prequels to stories that didn't come out last year). That said, we won't be trying to soak in quite as much here, so don't expect the page-long analyses of each issue that we went into with the first issues. With the relaunch, it was important to consider a number of factors. With these zero issues, we just want to see whether the zero issue is a good comic, whether it fits with the #1 and what it might say about the future of the title. Action Comics #0 Grant Morrison is entering the home stretch here, and he does so in fine form. While nominally exploring the first public appearance of Superman and looking back at the day Clark decided to open a strange, new chapter in his life, the issue focuses quite a bit of attention on what separates the Man of Steel from other costumed crimefighters. This is far more the hero of All-Star Superman than anything we saw from Grant Morrison in the first year on the title, and if we can get just one story like that out of him before he leaves superhero comics for the time being, that's a win. Ben Oliver on art was a strange choice; he seemed like a poor match for a Superman book, frankly, and by the end of the issue I wasn't completely won over. Still, there were a few beats in here where the emotion on a character's face needed to be just right and Oliver hit a home run, so while it often seemed like a misallocation of his talent on a book for which he couldn't provide the best possible look, there was certainly something there that's hard to argue. 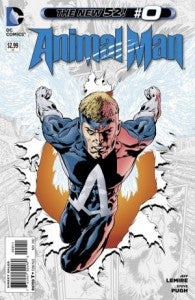 Animal Man #0 Steve Pugh's art on Animal Man is neither as bizarre nor as impressive as Travel Foreman's was, making the zero issue somewhat incompatible with the #1. It's also an odd issue, in that it takes Animal Man back to square one, giving fans his origin as well as the "origin" of his daughter Maxine, who has been every bit as much the focus of the series as has the title character.  Unfortunately, most of the best tricks here were already given up in #1, and what we get here is mostly just a behind-the-scenes look at how the creatures inside The Red perceive Buddy Baker and how they tried to shape him. It's fascinating stuff, but it really feels like "how the sausages are made," rather than a big, important story in its own right. It certainly does what it can to set up the next big story, though; the crossover involving The Rot that's been building essentially since Animal Man #1 and Swamp Thing #1 is something that's apparently been in the water for the entire five years Buddy Baker has been a superhero. Batwing #0 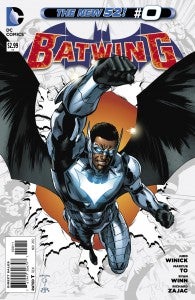 The art by Marcus To is inviting and comfortable, something that Batwing sorely lacked back when it launched with Ben Oliver on art. His stuff was exotic, beautiful and somewhat inaccessible--that inaccessibility contributed to a sense of strangeness around Batwing that had basically been there since the title was announced. Here, we had an African superhero with only a tenuous connection to the DC Universe, but one whose entire existence relies on the idea that Batman, Incorporated exists--something that seemed contradictory in a world that had only just come to accept superheroes. The issue has a richness that suggests outgoing writer Judd Winick had a lot to say about the world the character inhabits, but frankly it feels like an awful lot crammed into not a lot of pages, and as a result many of the metahumans we glance at while we're moving through a two-page spread on "African superhero history" just feel generic. You can't blame either Winick or To for that, but perhaps this particular zero issue was a bit too ambitious an undertaking--something that you can't necessarily be surprised by when you know the writer, who's been on since the beginning and likely had some longer-term plans, is leaving the title soon to work on more creator-owned stuff. Detective Comics #0 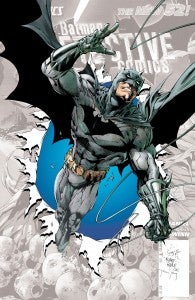 Generally, I like Gregg Hurwitz's writing, and I've never understood why so many people get all over Tony Daniel's art...but this issue left me cold. Exploring Bruce's "final lesson" from high atop the Himalayas, wherein he essentially is told that to get too close to someone will bring death and doom. It's a cynical, strange story and it's not entirely clear whether or not Bruce is meant to believe it. Seeing him show up again in the backup story, returning home with a full beard and a great big smile for Alfred sort of undermines the negativity of that first bit, but one has to wonder whether the theme of "people who get close to you have bad things happen to them" will be something Hurwitz and the other Bat-writers will be dealing a lot with in the upcoming, Joker-centric story Death of the Family. Dial H #0 Riccardo Burchielli did this book no favors; his art style just seems to clash with the writing, and frankly writer China Mieville has been more or less unassailable since the title launched. 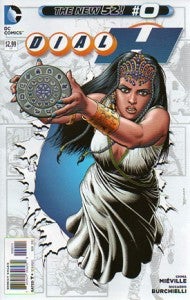 This one's more of a lark than the others, exploring the strange past of the H-Dial, which features an early iteration that existed as a sun dial and therefore took days to properly dial in for your powers. That kind of delightful randomness is exceeded even within the pages of the issue, when our lead character is transformed into Bumper Carla, a superhero whose powers rely on her magical bumper car and who says things like, "I bumped it into fairground hell." The issue itself ends on a tragic note, and seems unlikely to be the same kind of continuity-servicing thing that the rest of the zero issues are...although we'll see. Earth 2 #0 Art by Tomas Giorello made this a hard book to read; his Superman is just plain ugly and that's only the worst in a batch of bad characters who all look as angry, soulless and "EXTREME" as any pouch-and-shoulder-pad-wearing '90s Image character. With constant gritted teeth and incredibly "poised" body language on every page, the whole issue looks like it was done by Sam Keith, if Sam Keith's work were sterile and dull. 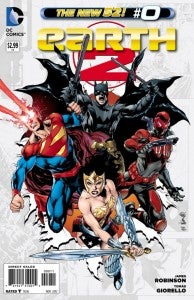 It made the soliloquy by Terry Sloan, also known as the issue's villain Mister 8, difficult to focus on, especially since a good chunk of the issue was done in big, widescreen pin-up art style that really let Giarello strut his, err, stuff. Whatever that stuff may be. The story itself is an interesting morality play. Sloan's admittedly insane plan is likely one that a lot of people would support if the challenges faced by the Earth Two Justice League were to come to pass in the real world, but that doesn't make them right and it certainly doesn't make them heroic. He's a pretty darned bad guy, and that can't be hand-waved by a final page where he's sipping Scotch in front of his fireplace talking to himself about how he'll be viewed by history. It's been a couple of months since I picked up Earth 2, and I had enjoyed what I had read, but I'm not sure there's any coming back from an issue this bad. It's not just the art; Robinson does little to elevate the material here, and at the end of the day it's about as bad as his run on Justice League of America was before Flashpoint mercifully ended it. G.I. Combat #0 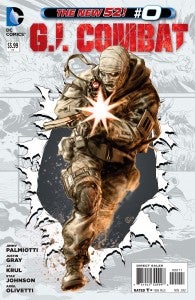 Best DC issue of the week, hands down. In a bizarre, disjointed and truly clever issue that evokes some of what Valiant Entertainment has been doing with Bloodshot recently, this zero issue is at once a great introduction the Unknown Soldier for the uninitiated and loaded with a ton of clever material for the more seasoned readers. Palmiotti and Gray outdo themselves which, at this point in their development and after years of being arguably the most consistently excellent creative partners in mainstream comics, is a damned impressive feat. Krul's backup feature set in The War Time Forgot is no slouch, either, and Ariel Olivetti's beautiful art is every bit as poised and agonized as is the Giorello I lamented above--but the compositions, the color, the simplicity  of the work rather than unnecessary detailing all come together to advance the story and never distract. Green Arrow #0 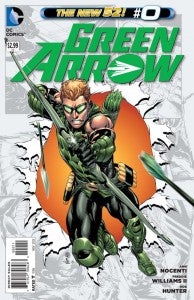 Let me start out by saying that I like Freddie Williams II a lot. His work on Robin was terrific and I've seen a number of other gigs where I thought he fit very well. I even thought he was the high point of Captain Atom, which I never thought was as much of a mess as other critics and the public at large seemed to believe. Okay, with that out of the way: This may be the most unfathomably hideous comic book that was ever published by a major publisher. Each page of Green Arrow assaulted and insulted my senses more than the one before, until the first appearance of the issue's villain Iron Eagle, which gave my brain a blue screen of death and forced me to get up, make some coffee and take a break away from the issue. I'm not kidding--this book is the low point of the last few years for a character who headlined a story that involved his sidekick talking to a dead cat for several pages. Holy. Cow. Coming back to the issue, I discovered that if you covered your eyes and just read the text, the issue was much better. Not good. But much better. Give this one a pass, folks. For your own sake.