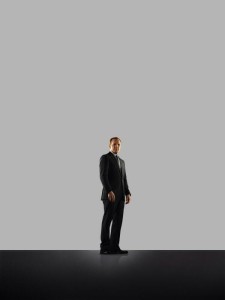 The cast and crew of Marvel's Agents of S.H.I.E.L.D. met today in Los Angeles to present the show for Television Critics Association at ABC's upfronts. They also screened a new trailer for the series--no word yet as to when it will be online. Present at the event were Clark Gregg, Iain De Caestecker (Leo Fitz), Brett Dalton (Grant Ward), Ming-Na Wen (Melinda May), Chloe Bennet (Skye), Elizabeth Henstridge (Jemma Simmons), Executive Producers/co-creators Joss Whedon, Jed Whedon, Maurissa Tancharoen, and Executive Producers Jeffrey Bell and Jeph Loeb. Whedon told reporters that any synergy between the series and Marvel's Cinematic Universe offerings (other than The Avengers, which serves as its jumping-off point) is still being worked out, "but that those things are the bonus stuff." They don't want to detract from the main cast. They did say that the first season--or at least the pilot--takes place prior to Iron Man 3. "What's important to us is character," Loeb said of fidelity to the movies. "As long as it has that element of character and humor, they'll stick as tightly to the continuity as best as they possibly can. But every now and then there may be some slip up where something happens." Loeb ducked questions about Coulson's return ("That's a Level Seven secret") and the nature of David Conrad's role ("It'll be awesome"), while Bell said that the production staff is equipped to keep the show at the same level as the (polished and cinematic) pilot. 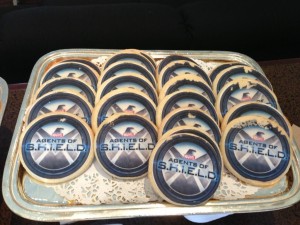 "They've gotten a lot of trust, which is different than freedom," Whedon said. "It wasn't a question of the Marvel getting out of the way, it was about working together." He added that Marvel and ABC have been very supportive of the vision that he and the showrunners first laid out. Asked about his level of involvement in the series going forward, Whedon said, "As much as an Executive Producer can be who is also making a movie." Asked about similarities to Firefly, Whedon said, "I've always been interested in seeing groups on the fringe. This group is out there by themselves, which will be both an advantage and a disadvantage." Moderators on Marvel's liveblog repeatedly hinted that there was some special significance to "681 PCE," the license plate on Agent Coulson's car "Lola." "We will have more info about international airings hopefully over the next month," Marvel's Ryan Penagos promised--that was one of the more frequent questions on the blog. In the show, Agents Fitz and Simmons talk over each other a lot, prompting a question about whether that shows a lot about their character as well as allowing them to get out a bunch of great dialogue. Jed Whedon and Tancharoen (who are married) said they wanted Fitz and Simmons working relationship to very much mirror their own. Jed Whedon compared making the show to when he, his wife and brother made Dr. Horrible's Sing-Along Blog, which they didn't think anyone would see. They approach this with the same attitude. Hints Marvel, "In this world, post-Avengers, the world's out of control and people are in possession of things that they may not be ready for." Sounds a bit like the Item 47 short may play into this series, or at least similar events. Whedon won't confirm or deny whether J. August Richards is returning after the pilot, but said that he thought the actor was great, so "do that math." "We won't be making references to Marvel for the sake of making references," said Tancharoen. "They'll be in there if they make sense." Added Bell, when they come up with a type of character and thinking of a name, they'll go through the comics history and see if there's a character with similar powers/personality where they can take that name. Whedon said that the explanation for Coulson's return will be teased out over the course of episodes. "There was never going to be a show called Agents of S.H.I.E.L.D. without Clark Gregg," said Loeb. "There will be a challenge every week," Jed Whedon said, adding that "We're going to try and hit a new thing every week. But there will be overarching mythology." "Every week, it's not going to be some new hero," Joss Whedon added. "It could be a device, or a mystery, or anything. They want to switch it up and deal with every aspect--the heartfelt stuff, the spy stuff, everything." "The thing that appealed to me was the idea of the people who don't have the super powers," he added. "Everybody matters. The people that get shoved to the side in a giant epic movie that only lasts for two hours can step into the spotlight." At the close of the event, Clark Gregg announced that he would tweet out the first official poster for the show immediately after walking off-stage, and that after that tweet was retweeted 3,000 times, Ming-Na Wen would release a second.