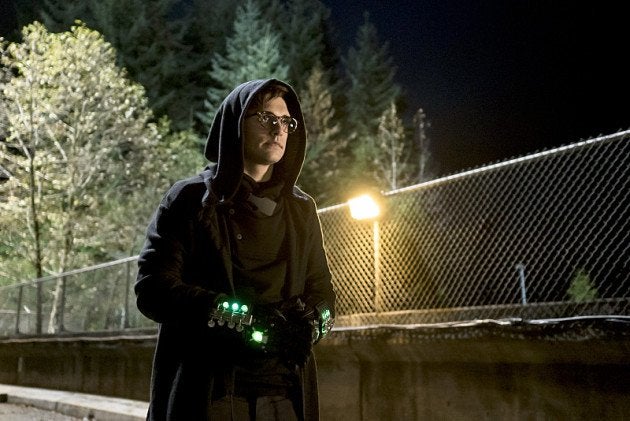 Andy Mientus is bringing his brand of Broadway magic to The Flash tonight at 8 p.m., when he'll appear as Hartley Rathaway, the Rogue better known as the Pied Piper.

Piper will return to S.T.A.R. Labs, angry at Harrison Wells and looking for trouble, in an episode that we already know will see him don a version of his sonic-powered gear from the comics and take on police cars.

Mientus joined us to talk about his role and the exciting, twisting-and-turning episode ahead.

You're no stranger to coming onto these things when they're a moving train. Is it always gratifying to land a role on something that's a huge hit?

What's been really cool in this instance is when I was cast, only the first episode had aired. I auditioned a bit before I started shooting. And the pilot obviously had historic numbers for The CW but you never know if a show is going to really catch on. So it's been really cool to see it become such a thing and to be a part of that. I've been really proud of it as it's been progressing.

Everyone's excited about Piper. Do you clear off the Internet for your own protection, or do you bathe in the entusiasm for the character and just try not to worry about the other stuff?

Comic fans are one thing, but I feel like everything I've done so far has come with this rabid fan base built right in. My first job was on this [Broadway] show called Spring Awakening that had this crazy, rabid, teenage fan base. Smash had this crazy fan base and I came into that late and now I'm doing Les Miserables, which has decades of fans. So I've learned through those experiences to just sort of avoid, avoid, avoid.

For every ten good things that you read, there's going to be one bad thing. There's just bound to be. And for me that's what will stick with me. I can read a hundred positive comments and one terrible one and then be pissed all day long, so I've learned to just trust that if the writers are happy, the directors are happy, I'm happy. If your bosses are pleased, then you're doing what was asked of you.

Your character was kind of teased last week and it seems your parents are a key part of the character's dynamic. Is that something you guys are going to get into right away?

It's definitely referenced and without giving too much away I'll say that it's not dealt with head-on, at least just yet, but it's brought up because it really keys into Hartley's whole motivation to do what he's doing. You see that his lack of a family created this big hole in him and another character sort of filled that gap for a time and when that turns sour, it really sets him off and sets him on this villainous path.

So his relationship with his parents is sort of the root of everything, so it is really important which is why it's been brought up already.

You're after Wells in this episode, and obviously he's kind of a surrogate father for Barry at the moment, so does that create an interesting dynamic for you and Grant [Gustin] to explore?

Yeah. I think it's classic almost sibling rivalry that's going on. If Barry is the new baby, the new golden child, then what does that make Hartley if Harrison has become that for him? So yes is the answer to that.

Piper is a character who isn't always all bad. Do you think that being set against Wells more than Barry opens up doors for you to potentially be a good guy down the line, when Barry finds out about Wells' true nature?

Yeah. I think you're going to find in this first episode where he's introduced that pretty quickly you see that it's a little bit more complex than your typical villainy where I'm after money or I'm after power.

When you find out why he's fighting Wells, I think you start to see that he's not your typical villain and maybe not a villain at all, maybe just so confused and angry but maybe not so different from Barry or from some of the other S.T.A.R. Labs kids.

Yeah, I think there's really thrilling possibilites of where it can go based on the way that we've set it up.

Is your character actually a metahuman or are you like the Rogues that we had this week where you've got wonderful toys?

Yeah, I've got wonderful toys so far; so far it's just gadgets.

The details of Piper's involvement with most things has been under wraps. Is it hard to do these interviews with so little out there?

Umm...[Laughs] There's a couple of answers to that. One thing is that I really don't want to spoil the things that I do know because they're really cool. I think this episode is really strong, there's a lot of twists and it's a really interesting, more personal episode than people might be used to. There's a little bit more intimate scenework going on and more drama than just full-on action and that really interests me.

And the other thing is that with any TV I've done, when people as questions far out into the future, usually we don't know. You know about as much as we do becuase the scripts are coming week by week. It's a little hard to know where things are going but also a lot of times we can't say.

You aren't the first LGBTQ character to show up in the Arrowverse but your character has been scrutinized in that way more than Canary and Nyssa. Has that affected your day to day, having those conversations in every interview, or is that just something where you say "Well, that's one of thirty or forty things about my character I have to talk about today?"

Well, that's how I look at it, definitely. I think that when you're a queer person, it's generally not the first thing you think of about yourself. I think it's part of you; it's like having blue eyes or brown hair or whatever but there are much more interesting things to say. I think there's a whole lot more going on than just him being gay. I think him being gay is like a few lines so far. I think there's room for it to be more of a focus in his storyline down the pike but for now it isn't that much of a focus, just more of a cool detail about him.

I think people are making a big deal about it becuase there just aren't that many badass, dangerous, gay male characters for whatever reason. I don't think people expect that. I think there's this stereotype of gay men being weak in some way or being polite or whatever. I think the tide is turning on that. I think on [American] Horror Story, there's so many terrifying gay characters on that every year. So I just think its something people don't expect and so it's something that people have to talk about. I'm hoping that soon it will sound as ridiculous as talking about a black superhero or a female superhero -- something you don't need to mention or something that sounds silly to even mention. But for now it's a point of interest so we have to talk about it.

Before you were ever on board, it was already the one thing people were talking about. Do you think part of this discussion is that for months before you were cast, that was all there was to talk about?

I think it's a combination of curiosity slash shock, and people that are really excited that that's going to happen. I think there's very little negative reaction to that nowadays but I think there's some fans that are like "How are they going to handle this? Is it going to become a different show than I've fallen in love with? Is it going to be like some after-school special or something?" And then I think you get some people who are just like, "Oh, that's awesome." So I think that's why it's a big deal. I also think that Greg [Berlanti] bringing a gay character into the show, some people are going to see some kind of agenda or something but of course that has nothing to do with anything and Piper has been gay for a long time, since long before Greg was involved with The Flash.

And Piper has been a key part of the Flash cast for most of my reading life, since the '90s. He'll fade away but when he comes back it's always a thing. When you audition for a part like this, in the back of your head do you just go, "Am I a series regular in Season Two?"

Well, you're always hoping, aren't you? [Laughs] Listen, I don't really know much of what they have planned beyond what I've been told and I never believe anything until I'm there doing it because you never know how things change in this business. But I will say that I really love this character and I love, love, love this cast and team. It's probably my favorite thing that I've ever worked on just because the people are so lovely and it's so stupidly fun to flim these action scenes and deliver this kind of heightened superhero dialogue.

So obviously I would be thrilled if I was asked to be more of a premanent fixture but you're right in that he will fade in and out, make a flash, and then kind of disappear into the background for a while and there's value in that, too, so whatever happens I'm really happy to be playing it.

You touched on something with the cast; this is a great cast and most of the guest actors haven't gotten to work with most of the cast because Flash not having gone public yet, the storylines were a little more segregated. Given your connection to S.T.A.R. Labs, though, did you get to play off just about everybody?

Yeah, I did definitely get to work with many more cast members than I think the average villain got to because of the S.T.A.R. Labs story. What I'm really interested in is that there's a couple of characters we're meeting up with in recent episodes and in upcoming episodes as we learn more about S.T.A.R. Labs prior to the explosion. There were more players there than we originally thought and so I would be really interested in if the show explores a little more in flashback of what was going on in the lab before the explosion. I think there's a really rich thing, which would allow me to work with some actors I would really love to work with.

Also, I hope, I hope, I get something to do with Jesse Martin. He's a really good friend of mine from Smash, I've idolized him for years, ever since Rent, and he's just a great guy. This year we spent Thanksgiving and New Year together. I would be in Heaven to do some scenes with him, so here's hoping.

Andy Mientus Talks Pied Piper's "Sibling Rivalry" With The Flash, Has "A Whole Lot More Going On" Than Just Being Gay