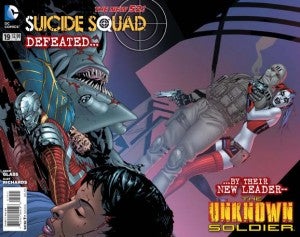 It looks like there won't be many surprises left on DC Comics's "surprise" gatefold covers by the time the issues start to be released next month. There are already half a dozen of the covers revealed, showing off Man-Bats, New Gods, a whole new Stormwatch and more. And today we get Suicide Squad #19, in which we finally see who it is that's taken out the team and left them in the bloody heap they were on the first half of the gatefold. That would be new team leader the Unknown Soldier, looking decidedly like he did in the Vertigo Comics series by Joshua Dysart and Alberto Ponticelli. Whether his history from that period will be carried over is unclear, although so far the histories of Vertigo importees have been spotty; Swamp Thing got to keep almost everything when he entered the New 52, but Constantine did not. The Unknown Soldier, like Swamp Thing and Animal Man, has not always been a Vertigo character and has made the jump back and forth--but the version seen on the cover doesn't much resemble past DC incarnations.

Another Vertigo Character Makes the Switch in Suicide Squad #19