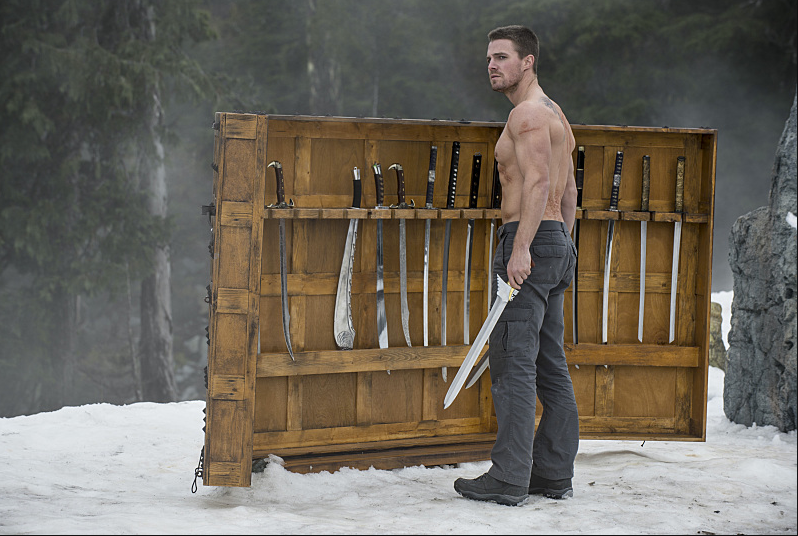 "The Climb" begins with Arrow giving Detective Lance a Christmas present—a tied-up thug at Starling City’s Police Department. But the fun times are cut short when Arrow is ambushed by the League of Assassins. The assassins drug Arrow and bring him to Nyssa al Ghul.

Nyssa tells Arrow that if he doesn’t deliver Sara’s killer to the League of Assassins, then the League will start murdering Starling City’s citizens. More specifically, Oliver’s old friend Maseo , who’s now in the League, will.

In a flashback to the the past, Oliver talks to Maseo after torturing a suspect for ARGUS. Through his torture, he found out that a shadowy organization is creating a deadly virus called OMEGA. Oliver and Maseo infiltrate the organization’s facilities to retrieve OMEGA, but find that someone has already stolen it. They find the thief, and get more information out of him through torture.

Elsewhere in the present, Laurel Lance tells Thea that Sara is dead, and makes Thea promise not to tell her Father. At Queen Consolidated, Smoak tells Ray Palmer to forget about their kiss, and to go back to keeping their relationship “professional.” Angry, Smoak retreats to the Arrow Cave, where Oliver informs the group of Nyssa’s plans. Smoak runs the DNA samples found on the arrows that killed Sara one more time. And guess whose DNA she finds? Arrow himself—Mr. Oliver Queen.

Oliver thinks that Malcolm Merlyn planted his DNA on the arrow to frame him, and put him in the League’s crosshairs. Sara finds that a flight came to Starling City from Corto Maltese the night before Sara was murdered. Arrow then finds security footage from an airport, and discovers that Malcolm Merlyn indeed came to Starling prior to Sara’s murder. But he didn’t come alone. In his company is Thea Queen. Oliver realizes that Thea lied, and must have been in contact with Malcolm when she said she wasn’t. The evidence is stacking up against Thea, but Oliver refuses to believe that she was involved.

The debate is cut short when Ray Palmer calls Smoak from Verdant upstairs. He apologizes for abruptly leaving Smoak after they kissed, saying he felt guilty. He admits that he had a fiancé , but she was murdered during Deathstroke’s riots months earlier. He says he never intended to kiss anyone else after that.

Over at Starling Police Department, Laurel's mother Dinah pays Laurel a visit. She asks Laurel where Sara is, and pressures her to telling the truth. Laurel reveals that Sara is dead, but begs her mom to not tell Detective Lance.

Oliver confronts Thea at their apartment, and asks her if she flew in from Corto Maltese with Malcolm several months ago. Thea denies the accusations. Team Arrow suggests that Oliver try asking Thea not as her brother, but as Arrow. Arrow gives it a shot, crashing into Thea’s apartment and demanding Malcolm’s whereabouts. But Thea fights back, using the training that Malcolm taught her. She manages to stun Arrow and flee the apartment.

Thea tells Malcolm about the attack, which prompts Malcolm to visit Oliver in the Arrow Cave. He reveals that Thea killed Sara, showing him a video of the incident. So the DNA on the arrows belong to Thea, not Oliver. Malcolm says that Thea only did it because he drugged her with a substance that made her open to suggestion. His purpose for doing so, he says, was to force Oliver to take the fall in Thea’s place. Malcolm tell Arrow that when he tells Ra’s, he can face a trial by combat with the Demon. If he survives the duel, he gets off scott free. If not, well…

Back in the past, Oliver and Maseo continue their interrogation. The subject says he doesn’t remember stealing OMEGA, saying that he might have been drugged into committing the theft. But back at Maseo’s home, his wife, Tatsu and their son are attacked by a white haired assassin. They capture Tatsu and take her away.

Oliver goes to Nanda Parbat to confront Ra’s al Ghul. He tells Ra’s and Nyssa that he killed Sara, fibbing that Sara begged him to do it. Ra’s almost orders Nyssa to kill Oliver, but Oliver says that he has the right to challenge Ra’s in combat first. Ra’s accepts the challenge. But before they begin, Oliver talks to Maseo, who now goes by a different name. He tells Oliver that he has 12 hours to take care of his personal affairs before the duel will begin at a separate, sacred location in Nanda Parbat.

Back in Starling, Laurel and Dinah visit Sara’s grave. Laurel tells her mom that she will find Sara’s killer, no matter what it takes.

Over at Queen Consolidated, Smoak forces Ray to show her what he’s been secretly working in so intensely. Ray gives in, and shows Smoak his shrinking technology and ATOM shrinking suit. He tells Smoak he’ll use the suit to save the people of Starling, and asks for her help.

Oliver jets back to Starling in his 12 hours, and visits Thea. He tells her that he will love her, no matter what. He then goes back to the Arrow cave, where he tells Diggle and Smoak that he’s entering the duel alone. Smoak begs Arrow to kill Ra’s and break his vow, otherwise Ra’s will just kill him.

With his farewells given, Oliver travels to the sacred battle ground in Nanda Parbat, hidden high up in the mountains. Oliver finds Ra’s waiting, who tells him to remove his shirt. Oliver chooses two swords as his weapons. Ra’s explains how he’s killed thousands of men before, and that Arrow will die on this day. Ra’s enters unarmed, using his superior fighting skills to take a sword from Oliver. Oliver doesn't stand a chance, and is mercilessly thrashed by Ra’s—who keeps one hand behind his back the entire time.

Oliver manages to get one blow in, but Ra’s then stabs Arrow in the chest. As Arrow bleeds out, his life flashes before his eyes. Ra’s then kicks Oliver off the edge of a cliff’s, succeeding in what so many have failed to do in the past. The Arrow is dead.

Arrow Recap With Spoilers: The Climb