It's pretty clear that much of the appeal of Marvel's Avengers vs. X-Men event is its simplicity. The X-Men and The Avengers are the chocolate and peanut butter of the Marvel Universe--they're two great tastes, that taste great together, and if you can settle years-old fanboy arguments about who can beat up whom while you're at it, all the better. That aspect of the story got us to thinking: What are some of our favorite mash-ups? The fights or team-ups so obvious that we thought they'd never get around to it, or so preposterous that we never even considered them before they made it to the printed page? Below we've got a list of ten of our favorites...what are yours? To be clear--intra-company crossovers are verboten here, so you won't see "Superman and Batman" or "Hulk vs. Thing" on the list. There are hundreds of those and while the best of them may be great fodder for another list, this one occurred to us mostly as an outcropping of the "X vs. Y" formula that yielded movies like Alien Vs. Predator. It's arguably a silly distinction, since Avengers vs. X-Men is unto itself an intra-company crossover...but it's our silly distinction and we're sticking to it. We also have steered away from the massive "event" stories and are sticking with stories that were either one-shots, movies or one-off stories, as opposed to something like JLA/Avengers or even DC Vs. Marvel. 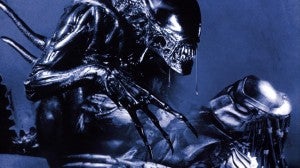 Alien vs. Predator What began as a Dark Horse Comics story eventually evolved into a comics franchise so potent that it was adapted into not one but two feature films. Fans of the movies were caught totally off-guard, and fans of the comics were shocked to hear that the first film was finally a reality after years of bugging the rights-holders that it had the potential to be brilliant...and while neither of the films exactly stood up as masterpieces of cinema, they were entertaining and arguably better than the then-current installments of either individual series. 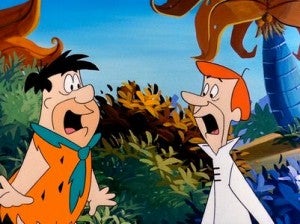 The Jetsons Meet the Flintstones

This one was so obvious, in terms not only of being two of Hanna-Barbera's most evergreen properties at the time but also in terms of the pair being essentially the same premise, just set in different times, that it's almost surprising it took them years to do it, and that it came as a standalone movie as opposed to just being an episode of The Jetsons. That said, as a kid I found it endlessly entertaining, and it's a dead heat between this and the Superfriends as the first time that I ever considered the idea that my favorite characters might inhabit the same universe. Even now, after having seen Star Wars a hundred times and read more American superhero comics than I can count, that realization can sometimes throw me for a loop; when it turned out that Tambi and Kasey from Strangers in Paradise were actually characters in Echo, I got so giddy that I probably still owe Terry Moore a beer all this time after. 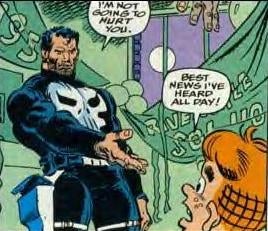 Archie Meets the Punisher Every so often, Archie finds himself meeting up with some really strange folks (most recently, KISS), but there's nothing quite like seeing The Punisher in Riverdale to give you pause. At the time, The Punisher was so wildly and ridiculously popular that he would appear in Marvel comics for a panel or two, just to say he was there, in hopes of boosting sales. He set the standard for the kind of silly and gratuitous guest appearances that Deadpool would pick up on in later years. It was a strange and terrible era, and believe me when I tell you--back in my Wizard magazine days, I was once assigned to read EVERY APPEARANCE THE CHARACTER HAD EVER MADE in order to create a statistically-accurate "rap sheet" for a wanted poster they were tipping in with one of the magazines. 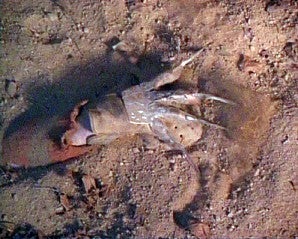 Onetime Booster Gold writer, who eventually sequelized this film as a series of Freddy Vs. Jason Vs. Ash comic books for Dynamite Entertainment, once told me in an interview that his whole reason for getting into show business was the hope that he could make a Freddy vs. Jason feature film happen. "It had been my ambition since I was a little kid, and I was in this fun position of being a guy whose first movie was his childhood dream," Katz said, and expressed that everything else he does in his career is basically just gravy. Not only did he manage it, but it was actually the final film in the original continuity for either of the two characters, before reboot fever hit both of the properties. As a result, the comic book sequels to Freddy Vs. Jason actually are the last vestiges of the old continuity, retaining the now-gone history of the characters. Superman vs. Muhammad Ali This one's notoriously insane, of course, but it's hard to pick too hard on anything by Dennis O'Neil and Neal Adams. It's one of those things: How do you make it competitive? Well, Superman loses his powers and ultimately it becomes a Rocky movie, years before Rocky movies were a thing.

It's not easy being green, and that was never more clear than when Savage Dragon and the Teenage Mutant Ninja Turtles faced off. How did this happen? Why did this happen?  Well, the TMNT had a comic coming out from Frank Fosco and Image around that same time, and in the early days of the Image Comics universe, it was much more...well...universe-y than it is these days. There's a little discussion of this stuff with Frank Fosco, too, in a recent episode of The Savage Fincast. Check it out! At a minimum, we got some Savage Dragon toys out of it--and they fit, size and shape-wise, with the Turtle toys of the time. Oddly, nobody knew at the time that one day both Dragon and the Turtles would turn out to be aliens! Star Trek/X-Men One of the notoriously random crossovers of the '90s, it's hard to make a decision between a story like this one and something that's maybe a bit less off-the-wall but equally mismatched, like Batman/Judge Dredd. The only thing anyone really remembers about the story is that Wolverine, the most over-hyped character in comics at that time, was taken down in a fell swoop by Spock's Vulcan nerve pinch, but it's arguably worth the cost of admission for that alone. Add in a hideously misguided prose sequel that teamed the X-Men with the crew of The Next Generation and you've got the makings of a bizarre and marginally readable franchise!

Teenage Mutant Ninja Turtles and The Flaming Carrot Yeah, the Turtles are on here twice. Why? Because if there's anything more gonzo than seeing them team up with Erik Larsen's Savage Dragon, it's seeing them team up with Bob Burden's Flaming Carrot! In characteristic Carrot fasion, the story was so completely bonkers that you almost kind of scratch your head and ask if the crossover was even necessary, but that's part of its unique charm. Burden has created (in both Flaming Carrot and the Mystery Men) characters who exist mostly just to do whatever occurs to them to do and then later label it "heroism" or, in rare cases, "plot." Of course, The Flaming Carrot got to hang out with a lot of cool folks, including Cerberus, and is arguably the most crossover-prone independent comics character this side of Gen 13 #13.

The cast of Scrubs in The Perhapanauts This one hardly counts, since it's barely more than a cameo and the Scrubs characters are not named, but the recent appearance of a half-dozen Scrubs actors in a truly inspired gag on Cougar Town has me thinking about the characters. At one point in The Perhapanauts: Second Chances, Arisa is taken to the hospital with severe injuries by MG. When he arrives, he ends up in a pissing contest with Dr. Perry Cox while J.D., Elliot, Carla and The Janitor stand around in the background. The fact that they have speaking parts is just enough to justify them being on the list--that, and the fact that I loved the in-joke so much I actually bought the page from artist Craig Rousseau. 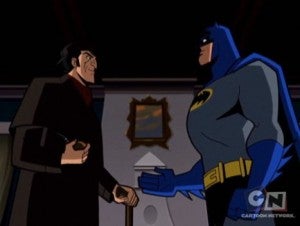 Batman meets Sherlock Holmes Yeah, this old gem again. An ancient Holmes teaming up with a Bronze Age Batman for one fun and brilliant story was a cool enough concept to whet the appetites of comic book fans for more, for years to come. They even recently revisited the idea in an episode of Batman: The Brave and the Bold.

Avengers Vs. X-Men and Ten Other Great Mashups