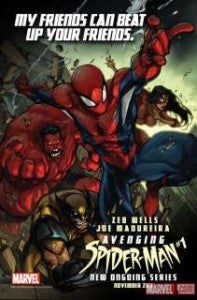 During a liveblog event held today, Marvel.com associate editor Ben Morse officially announced a new addition to the Spider-Man title lineup. Coming this November, Joe Wells (New Mutants, Dark Reign: Elektra) will write and Joe Madureira (Uncanny X-Men) will draw Avenging Spider-Man! During the live chat, enthusiasm for the project was high, with both Wells and Madureira excited about the upcoming project and the realms of possibility that are now open to Spidey! Wells said, "With Dan Slott nailing all the Peter Parker soap opera stuff in Amazing Spider-Man, we wanted to a book about Spider-Man as a super hero, out there in the Marvel Universe with the Avengers. This is the big super action movie of Spider-Man every month, with Joe Mad on art." The first story arc will see Spidey and the Red Hulk going underground to deal with not only the Mole Man, but a new threat as well. "I loved Spider-Man because he was funny. Over the years, depending on the writer, sometimes he's funny, sometimes he's not. Zeb is very very funny. I hope I can pull it off, but we're going to have some good comedy in there with serious big action," said Madureira, in discussing the balance of the upcoming heroics with Spidey's personality. The concept for the book itself grew out of the idea of resurrecting the Marvel Team-Up series. That idea was shot down quickly, due to the lack of impact those stories seemed to have on the Marvel Universe as a whole. Avenging Spider-Man is being called, " Marvel Team-Up but where the stories have a major impact on Spider-Man and the Avengers." Morse added that while this is its own book, it will be in line with what Dan Slott is writing for Amazing Spider-Man, and what is going on over in Bendis' Avengers series. The plan is to have Spider-Man also teaming up and working with other members of the Marvel universe, not just those who happen to be on an Avengers' roster. Wells suggested that he wanted to take Spider-Man out of New York City as well, with Asgard hinted at as a destination in the future. With that comment Steve Wacker added, ""Spidey works really well as a point of view character for the Marvel Universe, so it's always fun to see him in crazy places and situations." Along those same lines, Wells commented, "Having the whole Avengers rogues gallery at your disposal certainly opens up your options for villains." Besides Red Hulk, two other guests in the book were confirmed during the chat, with Wolverine being one due to both Wells and Madureira's interest in the character, as well as villain The Vulture, who Wells "has an idea for!" Morse promised that the book would be a monthly, with Amazing Spider-Man retaining its twice a month status. Madureira's interest and stake in the book is high as well, with the artist saying, "I don't like working on stuff unless it's going to make an impact. I want people to talk about this and remember it. If I finally get my crack at Spider-Man and then blow it, ugh. I will happily walk in front of a bus to sell more copies after I finish." Wells recognizes the potential for ripple effects through the pages of ASM, saying, "In my eyes, Dan Slott is daddy. I don't want to make daddy mad. If daddy likes something the kid does and wants to use it, great." Both writers will certainly be aware of the others' work, but do plan on keeping their own books as showcases for the character and his story potential. So what are your thoughts, readers? Ready for a new Spider-Man book? Love the art? Thoughts?? Here's a sneak peak at some of the interior art you can expect! 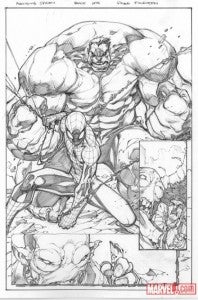