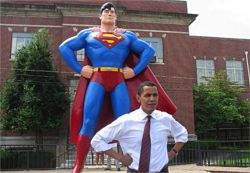 When times are tough, America looks to find heroes. The Great Depression was the heyday of the American comic book. For only a dime, people could forget about the harsh realities of the real world and journey into a place where there was always a hero waiting to save the day. Now, with America facing what is widely being called the toughest economic times since the Great Depression, it only makes sense that comic book superheroes are coming back in a big way. Of course things have changed a lot since the Great Depression, so superheroes aren't just limited to four-color print pages, and they are popping up all over mass media from television to movies. Superheroes are even popping up in our political system. With President-elect Barack Obama representing the hope of a new generation, many in the world media are increasingly drawing comparisons between him and superheroes. Pictures have portrayed Obama in various superhero costumes from Superman to Captain America. Legendary comic artist Alex Ross even created a t-shirt design that showed Barack Obama pulling open his shirt Superman-style to reveal a superhero costume with a big red "0" beneath. As a reported comic book collector himself, President-elect Barack Obama has not shied away from the superhero comparisons. In October, Obama joked at a charity fundraiser, "Contrary to the rumors you've heard, I was not born in a manger. I was actually born on Krypton and sent here by my father Jor-El to save the planet Earth." Obama even posted a picture of himself standing in front of the Superman statue in Metropolis, Illinois to his Senate website. Of course when Entertainment Weekly posed the question to Barack Obama of which superhero he would want to be, he abandoned the Superman comparisons for some more average guy type superheroes. Obama said, "I was always into the Spider-Man/Batman model. The guys who have too many powers, like Superman, that always made me think they weren't really earning their superhero status. It's a little too easy. Whereas Spider-Man and Batman, they have some inner turmoil. They get knocked around a little bit." With America facing challenges from economic turbulence to terrorism, there is no doubt that President-elect Barack Obama will soon be put in a position where he will have to earn his superhero status. While the problems facing America will likely not be fixed overnight by a Superman, it's possible that a man with the intelligence of Batman, who can also relate to the average guy like Spider-Man, can get us there. For right now, Obama has accomplished his first heroic task by giving America hope, and hope is often the first step on the road to recovery. Photo: Obama.senate.gov