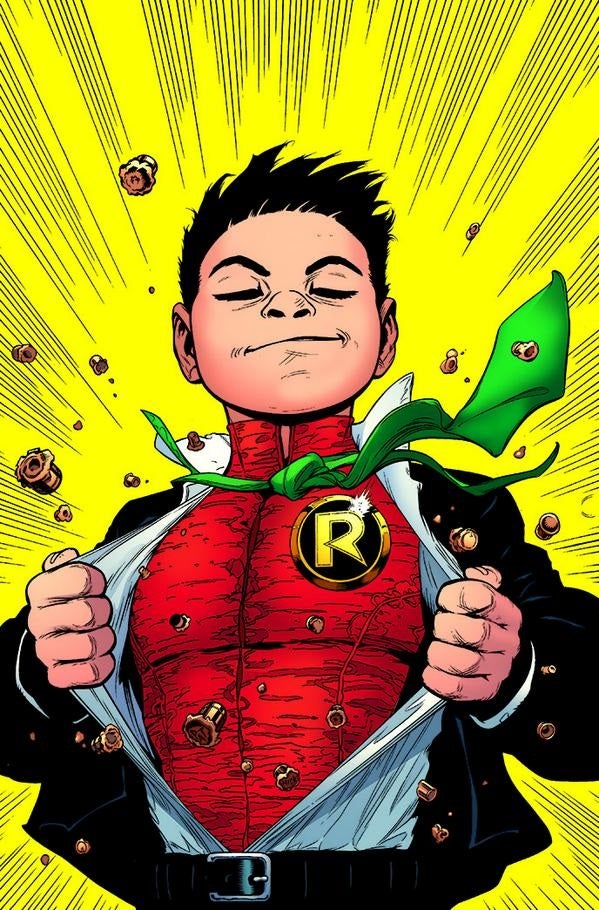 Batman and Robin writer Peter J. Tomasi has posted the cover to January's issue #38 to his Twitter account, and it seems to hint that Batman's son and most recent Robin, Damian Wayne, may be making a return.

Damian, the son of Bruce Wayne and Talia al Ghul, was created by Grant Morrison at the beginning of the writer's epic Batman saga, in the story "Batman and Son," and died at the hands of The Heretic at the conclusion of Morrison's run in Batman Incorporated.

Since shortly thereafter, Batman and Robin has followed Batman as he teams up with various allies such as Aquaman, Wonder Woman, and Frankenstein (with the title of the series changing each issue to reflect the current team up) in an attempt to retrieve Damian's body, first from Damian's grandfather Ra's al Ghul, and more recently from Darkseid on Apokalips in the "Robin Rises" story arc.

Ever since the title of the storyline was revealed, fans have been speculating as to whether it signaled Damian's return, or was possibly a red herring. The cover to issue #38 (presumably by the series' art team of Patrick Gleason and Mick Gray) certainly seems to indicate that Damian will be back in some form, but why do bullets seem to be bouncing off of his chest? Is this just a symbolic notion of how Damian seems unkillable, or does he gain literal invulnerability?

We're still awaiting the issue's solicitation synopsis, which may reveal more information ahead of the its release in January.

Will Vince McMahon Step Down If a WWE Sale Happens?