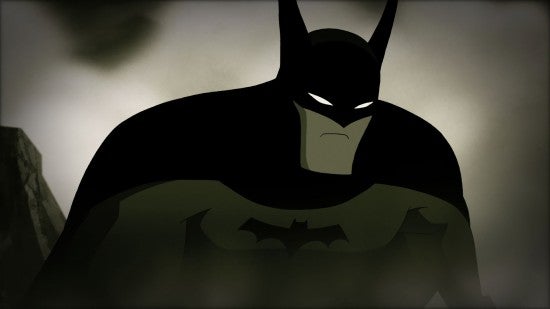 In today's "all Batman" episode of DC All Access, we got a sneak peak at Bruce Timm's upcoming Batman animated short celebrating Batman's 75th anniversary. Timm's short, titled Strange Days, will be a black and white period piece set in 1939, the year that Batman debuted. The short will feature Hugo Strange, one of Batman's very first enemies. The short involves Batman using tear gas on his enemies and then fighting in the fog the gas creates. Bruce Timm was the vision behind the classic Batman: The Animated Series and the DC Animated Universe that grew out of it. Until recently he was the head of DC Animation, overseeing the DC Original Animated Features and DC's animated televisions shows. The episode also gives a sneak peek at Batman: Eternal, the weekly Batman series launching this week, and the work of the new Detective Comics creative team, Brian Buccellato and Francis Manupal (formerly the creative team on The Flash), before showing off Ralph Garman's collection of Batman '66 merchandise. Strange Days will air as part of Cartoon Network's DC Nation block.