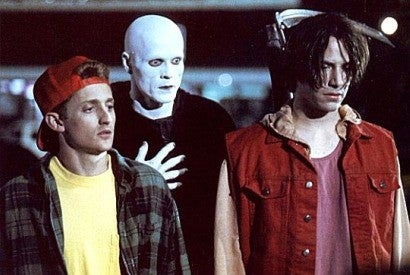 In a new interview promoting his film 47 Ronin, filmmaker Keanu Reeves told Access Hollywood that the existing draft of the third, as-yet-untitled Bill & Ted movie would require some reworking before they could start attempting to film it.

"The script is funny and there's a story to tell there," he explained. "[But] it needs to be adapted because right now it would cost, you know, $400 million to make. "There's a rift in the universe and there's all sorts of creatures. [CGI], it ain't cheap!"

In a recent Reddit AMA, Reeves's Bill & Ted co-star Alex Winter was asked "On a scale of 1 to 10, how likely is it that B&T 3 will be financed and actually get made?"