Ross Richie, founder and CEO of BOOM! Studios, is one of the most enthusiastic supporters of comics you're likely to meet; when ComicBook.com sat down with Richie at San Diego Comic Con for a short, "big-picture" interview about the future of the company and the state of comics, the publisher was wired and enthusiastic, chatting up friends and colleagues and enthusiastically greeting passersby...

...all at nine in the morning at Comic Con. Anyone who's been there knows that's pretty impressive stuff.

Read on to see what he had to say about creator-owned comics, the Archaia acquisition and plans to push through more all-ages original properties, now that the licensed books in the Kaboom imprint have helped strengthen the market for kids' comics.

ComicBook.com: In addition to taking on Archaia, which is a big kind of battery of Intellectual Property, it seems to me as though the days when you did mostly licensed work are waning and that you're mostly all original IP now, right?

Ross Richie: I would argue, from my perspective, we never were [overly concerned with licenses]. When we won the Best New Publisher in 2005 from Wizard Magazine, we launched with original content. Zombie Tales, Cthulu Tales, a lot of the anthologies. Then we were doing Hero Squared--which is a book that's very close to my heart--all that sort of stuff. All of that sort of stuff and then of course 2 Guns, which was a very early book that we did.

As we started to build, looking at licenses is a great way to expand your business and so when we launched Kaboom, it was with a lot of Disney licenses and a big part of doing that is based on--if a spot like all-ages and kids' publishing is under-served, retailers are scared to buy those books because there might not be an audience. The conventional wisdom is that kids don't come into comic book stores. So launching originals in that space could be deadly.

And it's a disservice to the creators if you can't serve them and provide an opportunity for them where they can flourish. We're very protective of people because they're literally giving us their dreams on paper, right? And I know if I gave somebody my dreams, I'd want them to try to do the best they could with it. So at one point we had twelve licensed titles through the Kaboom imprint that were all Disney-focused and that, on a market share basis if we just sliced Kaboom off as an imprint it was bigger than the next publisher behind us in market share alone.

That might contribute to the feeling that we do a lot of licensed material, but really what it is, is that it was giving commercial product to the retailers and now, a few years later, retailers have an identified section in the front of their store that has Adventure Time and My Little Pony and several publishers in the space and the ground really broke for everybody. Now, that's a valid way to publish comic books and so now I feel like we're in a place where we can do something like Herobear, which is an original, and it can be supported by retailers.

I'm a very strategic thinker and so I don't really just sort of make it up. We'll have a very specific philosophy and a specific approach and you'll see us do more original content through the Kaboom imprint as we grow that and do it in a real systemic way. 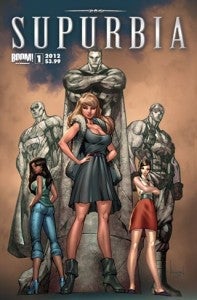 Last year, we launched eight originals and one of them was Supurbia, which really broke through and got everybody really excited. Then this year has been really exciting because between Six-Gun Gorilla and Polarity and Suicide Risk and Next Testament and now Day Men, the people have really been able ot get really excited about the original content that we're doing. And it's always been about that from the beginning, you know? Licenses are great but I don't want to be a cover band. I love certain comic books that are based on certain movies or TV shows, it's a blast, but at the core of it: we don't want to do Star Wars, we want to make our own Star Wars.

And we've done that with 2 Guns and that's really the dream, right? That you go out and you publish something that's an original idea and people want it and are excited about it. And the people that are excited about it are Denzel Washington and Mark Wahlberg--it's awesome.

ComicBook.com: Obviously nobody ever sets out to make a bad comic, but it seems like smaller publishers have a better batting average. Is the drive to be just fantastic partially because you don't have a budget to take a chance on something that's just pretty good?

Richie: Absolutely, yeah. Moreover, our mandate has to be...

There has never been a time in comic book history when there's been so many good comics and they're coming from everyone. It's incredible. I love it as a consumer because I have a big reading stack and it's a lot of fun. 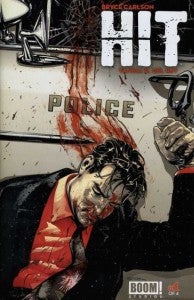 One of the books I'm super excited about is Hit, from Bryce Carlson, who's our Managing Editor and this new artist Vanesa R. Del Rey, who's a superstar. I'm so proud of where we are right now--when you look at Jorge Coelho on Polarity, when you look at Elena Casagrande on Suicide Risk, when you look at Jeff Stokley on Six-Gun Gorilla...Vanesa is in that vein.

The concept of the book is--and this is true--in Los Angeles, there was a group of guys that were in the LAPD and if you were a gangster and they knew you were a muderer, there was no question, and you got off on a technicality, they would go assassinate you. I was fascinated, I was immediately taken with this when Bryce walked into my office and asked if I knew it. Immediately, I was like, it's so interesting. Everyone has always sat there and watched the news--and I don't personally believe in the death penalty politically, but everybody's in a different political place--but I'd be a liar if I didn't say that there were a couple of times when I was watching TV and I was like, "You know? That person walking around is really dangerous and could really hurt some other people and maybe they shouldn't be walking around."

And there's an element of order versus chaos. The cops are agents of the law and they're there to enforce order but what about these cops who go on to be vigilantes and sort of find themselves on the other side? They're almost agents of chaos. And who is that guy? It's that dark wish fulfillment of, you wish you could pick up a gun and go make it right but let's be real: that's not the way to go. So it's a very complicated question.

ComicBook.com: And that's one of the things that, of course, you get at smaller publishers is things that are less black-and-white and more complex. I love the fact that all the BOOM! books I read are more character-centric. You can go an issue in a lot of these series with the main kind of "A-plot" not going anywhere, and not feel like you're missing out on things.

Richie: Yes. And I think part of it is a very specific philosophy to focus on character. The way I came to that was, I'll give you two guys that you'll follow to the end of the earth: one is Wolverine, and the other is Batman. You'll go to the grocery store with Batman and you'll go to the end of time--and I mean that in a cosmic, Jack Kirby, The Source way. You just want to be with that guy--and why? It's because of his character and it's the same way with Wolverine. 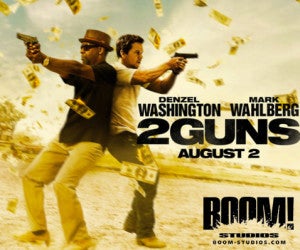 I think as readers people love comics, but we sometimes mistake plot for story and so a lot of it has to do with the fact that we know the characters and superheroes so well that having a shocking plot or a stunning revelation is the way you come back to read it month after month after month. Everyone remembers that curve ball--that big plot line. As a comic book fan, you start to think a lot about plot and then past that a lot of it is, "What's the spectacular fight sequence? What's the cool setting?"

And all those things are awesome but at the core of it if you don't have a character, who cares? If it isn't Batman and it isn't Wolverine--and we don't have Batman and Wolverine--what we can do is we can take the time to really focus on making sure that when the characters hit the page that they're really compelling and that's what makes you come back.

ComicBook.com: And all the things you're talking about can be applied equally to, say, James Bond. So do you think that establishing these beloved characters is also really key in terms of creating a property that somebody wants to make a film franchise out of?