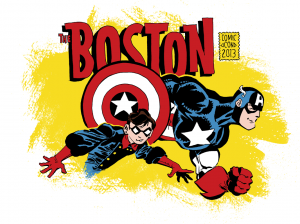 As reported yesterday, the Boston Comic Con is going forward with plans to hold their event this weekend, just blocks from yesterday's apparent terror attack on the Boston Marathon--but there's a catch. Convention organizers are asking cosplayers and other fans who might have them, to leave their prop weapons at home this year, in light of the need for increased security and the additional time  security staff would have to spend checking and clearing the weapons at the entry as a result. "Boston Comic Con is happy to announce that the convention will go on this weekend as scheduled! We hope to stand as an example of the resilience of Bostonians in the wake of this horrific tragedy," the convention said in a statement online. "The many statements of solidarity we have received from fans and guests alike have been very encouraging. We will be donating a portion of the art auction proceeds to the Red Cross for the Boston Marathon victims relief effort. In light of the heightened security in the city we ask cosplayers to not bring prop weapons this weekend."