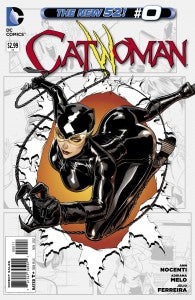 It's the cover that thoroughly confused Google, since most of the time "brokeback Catwoman" is a search phrase that's meant to return results relating to The Dark Knight Rises and Brokeback Mountain star Anne Hathaway. The cover to Catwoman #0, out Wednesday from DC Comics, has been revealed in a preview for the issue and will be markedly different from the version fans saw--and the Internet mocked mercilessly--in solicitations. The original version, which was widely criticized as not only needlessly sexualized but also physically improbable, featured a Catwoman head-on into the viewer's face, with virtually none of her torso visible between her bust and bottom, and her body suit partially unzipped to show her cleavage. The final version, visible on DC's website, is still pretty T&A-centric, but it features a pose that's decidedly less difficult for most people to get into, and her shirt's zipped up. Both versions of the cover are drawn by regular series artist Guillem March, whose sexy-but-tough take on Catwoman has made his art stand out among the New 52 titles, which are largely playing it pretty safe with most of DC's properties. 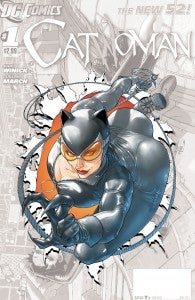 "You are a fanboy/fangirl. You´ve got the right to criticize my work. That´s the game. Cool," wrote March in a blog post back in June. "You are a colleague artist. You shouldn´t do that. Because doing good art is not enough to be a good artist." March parodied his own cover, though, in the style of cartooning legend R. Crumb, no stranger to overtly sexualized portrayals of strong women (thanks to Comics Alliance for bringing that one to our attention). The cover also notes that Adriana Melo will take on the art chores for the title, rather than Rafa Sandoval, the Ultimate Comics: Hawkeye artist originally solicited as working on the issue. Catwoman #0, written by Ann Nocenti with art by Adriana Melo and a cover by Guillem March, goes on sale Wednesday from DC Comics. Maybe the controversial, solicited cover will be included as one of the variants in the digital edition. But probably not.