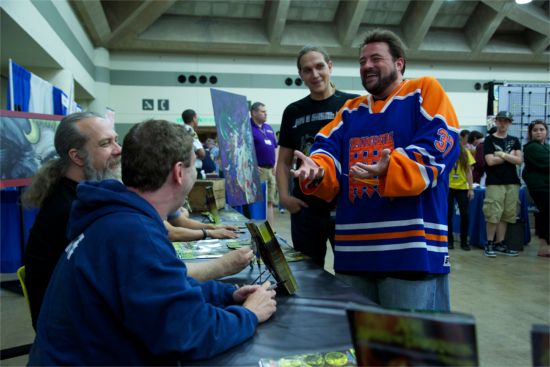 The "Cryptozoic Launch" episode of Comic Book Men kicks off with the Secret Stash guys discussing if superheroes ever have to deal with paparazzi. Walt says Batman could deal with it, but Ming thinks the Hulk would have problems. Walt says if his star rose and paparazzi were taking pictures of his kids, then he would just shroud them like Michael Jackson did. A seller brings in copies of Tomb of Dracula #1 and #13 to the Secret Stash. Tomb of Dracula #13 is important because it introduced Blade the Vampire Hunter. The seller is asking $200 for the pair, but after some negotiation, Walt agrees to buy them for $130. Several boxes of Cryptozoic Man #1 arrive at the Secret Stash. The comic is written by Bryan Johnson with art by Walt Flanagan. Because the Secret Stash guys are going to the Baltimore Comic Con to sell the comic, they have to call in Sunday Jeff to run the store. A seller brings in a Jawa Sandcrawler Star Wars toy to the Secret Stash. The seller is asking for $200, but Sunday Jeff says he could only give $50 because the toy doesn't work. The seller is only willing to come down to $160, so no deal is made. At the Baltimore Comic Con, Walt, Bryan, Mike, and Ming set up their booth for Cryptozoic Men. A long line forms to pick up autographed copies of Cryptozoic Man. Several fans ask to stroke Bryan's beard. A seller brings in some Mego Buck Rogers action figures to the Secret Stash. The seller asks $800 for the four figures, but Sunday Jeff is unwilling to pay that much because kids of today don't know Buck Rogers. The seller decides to keep the figures in his collection. At the Baltimore Comic Con, Kevin Smith and Jason Mewes stop by. They both pick up their own autographed copies of Cryptozoic Man.