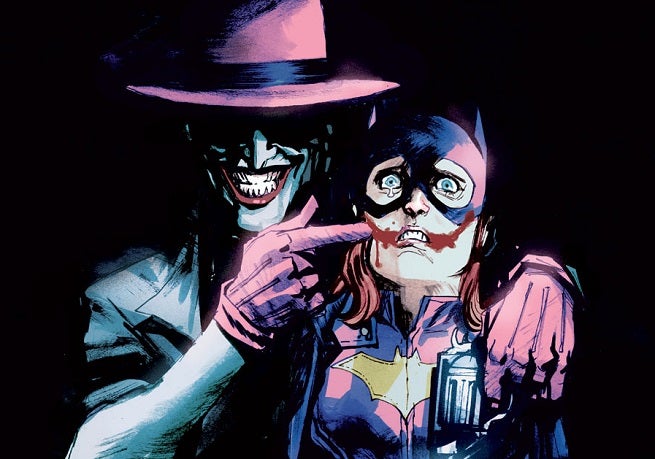 The cover, by artist Rafael Albuquerque, depicted a traumatized Batgirl standing beside The Joker, who was dressed as he was in Alan Moore's acclaimed The Killing Joke.

It was Albuquerque who asked DC to remove the cover from the publisher's upcoming releases.

The Killing Joke features Barbara Gordon being shot (which would lead to her paralysis), stripped naked and photographed, the photographs being used to terrorize her kidnapped father. Despite being one of the most lauded and best-selling Batman stories of all time, The Killing Joke has been strongly criticized for glamorizing or normalizing sexual assault. It's also been criticized because Barbara Gordon hardly appears in the story, so the attack on her only exists in the context of what it means for Batman and Gordon. It was one of the early cited examples of "women in refrigerators," a phrase coined by then-blogger, now comic book writer Gail Simone to describe the poor treatment of female superheroes and supporting characters in comics.

When the New 52 launched, some vocal critics hoped that The Killing Joke would be excised from Barbara's character history, but one result of her injuries -- a career as the cyber-superhero Oracle -- was deemed too rich to simply ignore, especially after advocates for the physically disabled bristled at Barbara being suddenly able to walk again when it was revealed that she was indeed the rebooted Batgirl.

"My Batgirl variant cover artwork was designed to pay homage to a comic that I really admire, and I know is a favorite of many readers," Albuquerque said in a statement. "The Killing Joke is part of Batgirl’s canon and artistically, I couldn't avoid portraying the traumatic relationship between Barbara Gordon and the Joker."

For some fans, the association with The Killing Joke was even more troubling because of the recently-retooled Batgirl, whose costume is more modest and who is generally being written as younger, sunnier, and more self-consciously as a good role model for young women.

"For me, it was just a creepy cover that brought up something from the character’s past that I was able to interpret artistically," the artist wrote. "But it has become clear, that for others, it touched a very important nerve. I respect these opinions and, despite whether the discussion is right or wrong, no opinion should be discredited.

"My intention was never to hurt or upset anyone through my art. For that reason, I have recommended to DC that the variant cover be pulled. I'm incredibly pleased that DC Comics is listening to my concerns and will not be publishing the cover art in June as previously announced."

DC also issued a statement, saying that they supported Albuquerque and would cancel the variant at his request.

"Regardless if fans like Rafael Albuquerque’s homage to Alan Moore’s The Killing Joke graphic novel from 25 years ago, or find it inconsistent with the current tonality of the Batgirl books - threats of violence and harassment are wrong and have no place in comics or society," DC wrote.

Batgirl co-writer Cameron Stewart later said on Twitter that "[Albuquerque] did not get threats. People OBJECTING to the cover did."

The issue itself will be out as planned in June. No word on whether DC will commission another Joker variant, although it seems unlikely since not every book in the line has one.