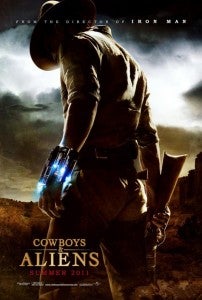 Having never read Platinum Studios' Cowboys and Aliens, I had no preconceptions going in. No idea about the plot, the concept or how the story would play out. It's probably a good thing, because this uninteresting and glacially developed film adaptation would probably have disappointed me even more had I been a fan of the book. The film boasts some heavyweight actors in Daniel Craig and Harrison Ford, who I hope hasn't reached the point in his career where he feels compelled to take "paycheck roles", as seemed to be the case here. While the premise for the story and film is pretty interesting and different, aliens arrive in post-Civil War America and attempt to eradicate us through a method of careful experimentation, the payoff doesn't add up to the intrigue that exists in the inherent idea for the story itself. The film opens with Craig's character, who we eventually learn is Jake Lonergan, awakening in the middle of a hot, desert-like landscape with no idea how he got there, where his deep gash came from, what the strange bracelet on his arm is or who the woman in the crude picture he finds is. From there the film begins to attempt to put together a mystery, with Longergan wandering into a town that fears and bucks under Harrison Ford's Woodrow Dolarhyde, a cattle rancher and former Civil War colonel. Ford does plenty of scenery chewing early on, almost as if he embraced the drab storytelling and decided to punch it up with some odd humor. As Dolarhyde comes to town to confront the local sheriff, Lonergan and his layabout son Percy, the movie picks up and has probably one of the few engaging scenes of the film, as the titular aliens make their move and begin snatching up townsfolk into the night sky. It's a well-done scene and certainly had some effective elements of fear present. Quickly though, we come crashing back to the very slow pacing of the film, which attempts to tie in a ever-widening ensemble cast of former gang members, Dolarhyde's assistants, the local sheriff, a young boy, a bar owner, Native Americans, and Olivia Wilde as the mysterious Ella, who has one of the more memorable lines in the film. She tells Craig's character at one point "you have to stop thinking". While her statement is directed at something key to the end of the film, I'd almost dare to say that her statement could be prescribed to the film itself, which seems to suffer from a lack of thinking about storytelling in favor of mystery, gold and alien plots that don't fully pay off. As the gang searches for the aliens in an attempt to reclaim their family and friends, Jake's past slowly begins to reveal itself, as does the secret that Ella has been carrying, which, I have to admit I found so absurd I actually laughed aloud in the theater. When the inevitable showdown with the aliens occurs, there are some pretty interesting action sequences, as the "cowboys" attempt to stop the aliens with 19th century weaponry, and the aliens themselves are genuinely scary and effectively done for the big screen. The final stages of battle unfold, and I had to fight the urge to just get up an leave, determined to finish what I had started. Plus I have my duties here, so there you go! For anyone who picks up on the tension and dynamic between Dolarhyde and Longergan early in the film, the final ten minutes of the film shouldn't be shocking by any stretch. The main problem with the film is that it can't decide what it wants to be. It doesn't work fully as an action film, as there's too little of it to actually support its two-hour length. It's not a character piece, as the canvas covers such a pastiche of types and typical conventions that it's not interesting, and I never found myself really invested in the characters. What it is, at its core, is a mashup of potential stories that equals a waste of time.

"Cowboys and Aliens" Doesn't Add Up