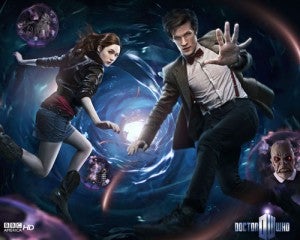 The new Doctor may have just been announced as Peter Capaldi, but Matt Smith is already planning his David Tennant-like comeback. Smith, who has played the role since 2010, reportedly told fans, "I am booked in for the 60th anniversary." Steven Moffat, for his part, said that things had always been planned to go down just as they are. "We discussed ages ago that Matt would do three series and then he would do the 50th and then Christmas," he admitted. "That was Plan A for a very long while. That may sound cold that it was so far in advance but you've got to plan a career. The question was, 'Will I be able to talk him out of it?' We went out for lunch and he said he'd come very close to doing another series but it was the same argument, 'If I do another series, I think I might do two more series, or three more series. I think I might never leave.' I knew he would do what most of them do and do his three years. It's difficult for any departing doctor. None of them ever wants to outstay their welcome." Smith's companion, played by Jenna-Louise Coleman, isn't going anywhere soon. Smith will leave the series in December's Christmas Special, after having co-starred with Tennant in a Fiftieth Anniversary special later this year. Capaldi will reportedly appear for the first time in the Christmas Special as well, meaning that he'll be established by the time his first series as the Twelfth Doctor begins.

Doctor Who's Matt Smith: I'll Be Back in Ten Years

Albert Pyun, Director of the 1990 Captain America Movie, Dies at 69

Does the Guardians of the Galaxy Holiday Special Have a Post-Credits Scene?