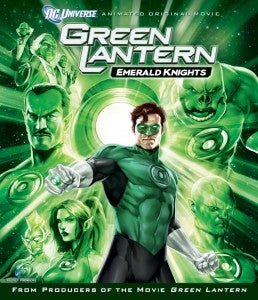 Green Lantern: Emerald Knights stars Nathan Fillion(Firefly), Jason Issacs(Harry Potter), Elisabeth Moss(Mad Men), and Henry Rollins (Sons of Anarchy). It is the latest direct to DVD animated movie in the DC Universe line. Like Batman: Gotham Knight, it is an anthology, telling tales of various Green Lantern Corps members. This is not a sequel to "Green Lantern: First Flight", which may confuse casual viewers as they both contain the same character designs. Why they didn't decide to go the sequel route, I'll never understand. That was a great movie and there were endless possibilities for a continuation. Unfortunately, we get a so-so dip into the mythology of the corps as rookie Lantern Arisia gets schooled by Hal Jordan, and at one point, Sinestro. The first tale is of the first four Lanterns, specifically Avra, a scribe to the guardians. In a moment of desperation, he creates the first construct, inspiring his fellow warriors, leading them to victory. The next story showcases Kilowog's ascension to the rank of Green Lantern. Henry Rollins is no stranger to the DCAU, having done voice-work for Batman Beyond and Batman the Brave and the Bold. However, as Kilowog, something seems off. Maybe it's because Kilowog isn't the tough as nails drill Sergeant we're used to in this tale, but even during the other scenes, he just doesn't sound right. Laira goes home in her story, arriving to a war-torn world where she has to deal with family issues. In one of the most entertaining segments, Rowdy Roddy Piper voices Bolphunga, who wants to throw down with the mightiest Green Lantern, Mogo. The ensuing story is the most humorous of the film, and a welcome addition. Hal Jordan's predecessor, Abin Sur tracks down the criminal Atrocitus in a decent tale before the finale. I especially liked the relationship between him and Sinestro as the two have always been portrayed as great friends. It really shows here. Finally, the overarching plot of the movie pays off as the entire Corps defends the universe against Krona, who is emerging from the sun. I feel like the animation is a little off compared to something like "Batman/Superman Apocalypse." It doesn't even look as smooth as "First Flight" did. Andrea Romano assembled a great cast for this one, with the exception of Henry Rollins as Kilowog. Nathan Fillion(who voiced Steve Trevor in the excellent "Wonder Woman" movie) steps into the boots of Hal Jordan, a role many hoped he would play on the big screen, but doesn't really get a chance to shine as he mostly narrates the stories. I understand the need to have this come out at the same time as the live action Green Lantern movie. It's a big deal for Warners and DC to promote the heck out of it. Why would you not have your main character as the highlight of this film, then? Again, a sequel to "First Flight" would have been more beneficial to the franchise. I'm guessing a lot of parents will probably buy this for their children. There's an awful lot of death in it for something that will likely be picked up for a younger audience. Aside from character situations, every story(save the overarching plot) was pretty much the same; Some planet is being attacked by a hostile force. The sheer amount of carnage and death caused by the Green Lanterns themselves makes me wonder if they're any better than the beings they fought. I miss the NYPD Blue feel of the previous movie. The Green Lanterns are an intergalactic police force. They do not deal out vigilante justice as they seem to in this film. It's pretty much kill, kill, kill. They don't even try to reason with the enemy. I think the anthology format is better suited to dealing with smaller, varying characters, like the back-up shorts that got packaged together with in the "DC Showcase" disc. This was one of the weaker entries in this series for me. It's a rental at best, providing some mild entertainment for fans of Green Lantern.