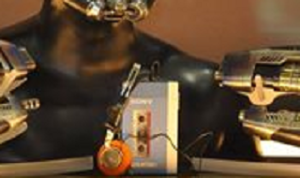 Is it possible that Star-Lord has been living in space or decades at the start of James Gunn's Guardians of the Galaxy? That certainly seems like a possibility since the table of props and costume elements from that film currently on display at San Diego Comic Con International includes a chunky Walkman with vintage orange foam headphone covers. With the cast and director having been pretty tight-lipped at Comic Con this weekend, this could be one of our first clues as to the plot of the upcoming sci-fi superhero film. During last night's press conference, Star-Lord and his group were identified as having been very self-involved for quite a while; could Peter Quill be taking on a persona not unlike that to J.J. Abrams's Captain Kirk?

Guardians of the Galaxy: Why Does Star-Lord Have a Walkman?