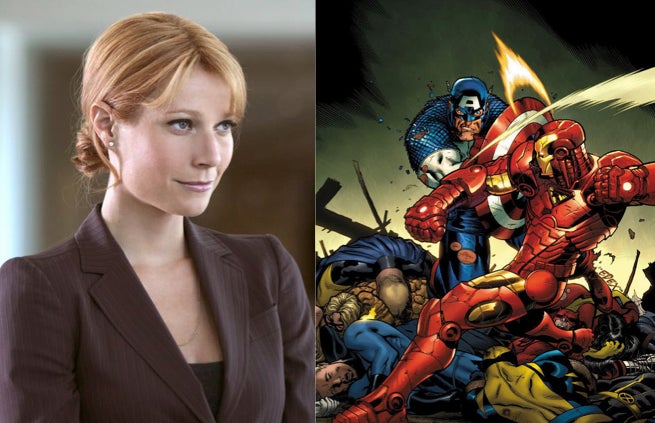 Marvel Studios is so good at keeping plans under wraps, that its most tenured actors don't even know what's going on.

Gwyneth Paltrow, who has played Petter Potts in all three Iron Man films and The Avengers, admitted that she's only hear rumors about her possible involvement in Captain America: Civil War. With Iron Man co-starring in the Captain Americathreequel, it seems possible that members of Tony Stark's supporting cast could also appear.

In Captain America: Civil War, Tony Stark and Steve Rogers will clash in a major way when the United States government passes a superhmuman registration bill that would hold all superheroes accountable to Uncle Sam. While Tony Stark will join the government and enforce the law, Captain America will rebel. Pepper Potts wasn't involved in the 2007 Marvel Comics storyline that inspires the Captain American film, but Marvel could at least fit in a supporting part for the character. Potts held a brief role in Marvel's last ensemble film, The Avengers. Perhaps the character will get something similar to that in Civil War?

"My fingers are crossed. I would love to be Pepper Potts again at some point in my life," Paltrow elaborated.

Paltrow should have a solid answer soon enough. With a May 6, 2016 release date set for Captain America: Civil War, filming will begin early next year.