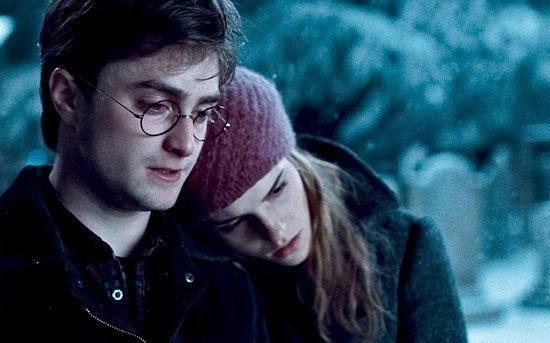 In a new interview sure to give fan fiction authors across the Internet a reason to cheer, Harry Potter author J.K. Rowling revealed that, with some time and distance from the end of the series, she feels she should have put Harry Potter and Hermione Granger together as a couple, and that Hermione and her eventual beau Ron Weasley would almost certainly end up in marriage counseling, reports Yahoo! News.

"For reasons that have very little to do with literature and far more to do with me clinging to the plot as I first imagined it, Hermione ended up with Ron," Rowling says in an interview with Wonderland magazine, previewed by the Sunday Times and due out Friday.

"I know, I'm sorry, I can hear the rage and fury it might cause some fans, but if I'm absolutely honest, distance has given me perspective on that. It was a choice I made for very personal reasons, not for reasons of credibility. Am I breaking people's hearts by saying this? I hope not."

This isn't the first time that Rowling has retroactively questioned her own work; back in 2007, three months after the publication of the final book in the best-selling franchise, she revealed to an audience at a speaking engagement that she thought of Albus Dumbledore as a gay character, even though he had never been explicitly established as such on the page.

The Wonderland interview was in fact conducted by British actress Emma Watson, who played Hermione in the Warner Bros. movie series based on Rowling's novels.

Watson agreed with Rowling, saying, "I think there are fans out there who know that too and who wonder whether Ron would have really been able to make her happy."

Seven years after the conclusion of her series of novels, Rowling is back at work in the Wizarding World of Harry Potter these days, penning the screenplay for a spinoff titled Fantastic Beasts and Where to Find Them and serving as an adviser on a British stage production of a prequel following Harry's earliest years.