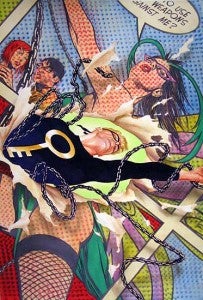 Michael Chabon, author of The Amazing Adventures of Kavalier and Clay and Wonder Boys, is a comic book fan. That should be a surprise to nobody paying attention. After all, The Escapist--the fictional comic book character created by the Josef Kavalier and Sammy Clay--has appeared in a number of comic books for Dark Horse, some of them written by Chabon. The Amazing Adventures of Kavalier and Clay, which was inspired by the stories of Jerry Siegel, Joe Shuster, Jack Kirby and Jim Steranko, won a Pulitzer Prize and, no doubt to the bafflement of some of the publishing establishment, was followed up with a graphic novel sequel. And in case going from #1 New York Times bestseller to Dark Horse Comics miniseries wasn't enough, Chabon entrusted the sequel to the care of a comic book writer, rather than doing it himself. Of course, that writer was Brian K. Vaughan--that's probably as close to a safe bet as you can get. But still. "I was inspired by BKV himself," Chabon told me in 2009. "By his work, by the deep, smart, savvy and sensitive fun that he'd clearly had with the task of reinventing the novel and the characters, putting it on his own terms and yet honoring the source at the same time." And if he'd had any doubts that Vaughan was the right man for the job, "they would have been allayed by the enthusiasm for the project of Ms. Schutz, who in my opinion is one of the greatest editors alive, period, in or out of comics." Chabon's work has always been infused with comic books and other pop culture, and his new book--which embraces pop music, the culture of vinyl and reportedly has a fair number of comics references again--has been getting the kind of ecstatic good reviews that thoroughly discredits that old idea that most comics readers are addle-minded souls in a state of arrested development. "Ambitious, densely written, sometimes very funny, and fabulously over the top, here's a rare book that really could be the great American novel," wrote Library Journal of Telegraph Avenue. "The great American novel." From a guy who compares Jack Kirby to Shakespeare and Cervantes. That ain't bad. Telegraph Avenue will be out on Tuesday. The Escapists by Brian K. Vaughan is available in paperback from Dark Horse Comics, complete with an ingenius introduction by Chabon.