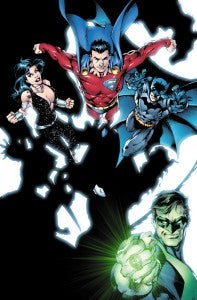 By this point, it's no secret that DC Comics' premier super-team, the Justice League of America, will be undergoing a dramatic lineup change this fall, under the pen of writer James Robinson. Another thing that is not a secret is the identities of some of those members, as recently revealed at Comic-Con. With a very cryptic image, as seen here, revealing some of those characters, the big, and obvious question, remains. Who else is on the team? Judging from the picture, traditional heavies such as Superman and Wonder Woman are not present on this team, replaced by Donna Troy and Mon-El, now sporting a Superman symbol on his chest. Interesting. Obviously we see Dick Grayson as the new Batman; a logical step given his history as a member of leader of groups such as the Teen Titans. Then there's Hal Jordan, Justice League veteran and a logical choice for this group. Big questions still remain, and those black silhouettes won't fill themselves up! So let's speculate! Other names that are definites or almost definites include Forgotten Heroes member Congorilla, who is featured in current miniseries Justice League: Cry for Justice, and Vixen who has not been explicitly stated as a member, but all signs are pointing to her inclusion and possible leadership role. Congorilla was confirmed recently by Robinson himself. So who else? Does this incarnation of the JLA need a Flash? That was the argument used in forming the most recent incarnation of our team, but will they be necessary this time around? Would this mean Barry Allen returning as the scarlet speedster, or someone else if at all? It's not too easy to discern any "Flash attire" in the picture featured here, but it's also hard to imagine a JLA without a speedster! Much speculation exists that the figure that appears in the air behind Batman will be Starfire. Her promotion to the full-on JLA would be a natural progression, and would put her in company with colleagues such as Dick Grayson and Donna Troy. Speaking of Titans, is that Raven we see just behind Mon-El's foot? She would be a natural fit for the supernatural/magic component of the team currently filled by Zatanna. She would also add another Teen Titan to the roster! Could one of the figures be Dr. Light? Recently reemerging as a force in the JLA, especially with her recent battle with Shadow Thief, this could be an indication of bigger things to come for her, especially if a good portion of this new lineup features characters who have not had major featured page-time in recent events or series. What about the smaller figure emerging, with arm crooked, from under Donna? The Atom? As a JLA figure, he would be a good character to add to the mix of new blood with the traditional figures such as Hal Jordan. Would there be room for the new Firestorm on the team? He would add some valuable, pardon the pun, firepower to the team, and notably during the Injustice League storyline, Batman commented on the development of Firestorm's power and his smarts while in the field. He's certainly battle-tested and able, but would he be appropriate in this lineup? Also, he doesn't seem to be too discernible in this latest lineup picture. So tell us your thoughts. Will there be an archer on this new team? What about Black Canary? Is there room for more than one Green Lantern? Give us your comments on who belongs on this new team, and who doesn't!

Justice League: Who Will be the Final Members?