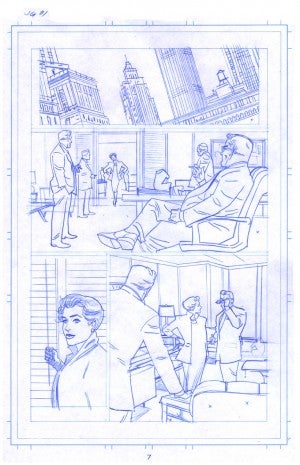 Mark Millar hasn't even closed the current chapter of "Jupiter's Legacy," but he's already started a new one by announcing a prequel series.

Teaming with artist Wilfredo Torres, Millar will explore his universe's golden age of superheroes in the 1950s, Comic Book Resources reports. Frank Quitely, "Jupiter's Legacy's" main artist, is providing the character designs and cover for the spinoff series, which is expected to launch in April 2015.

By visiting the heyday of Jupiter's Legacy's older cast members like The Utopian and Lady Liberty, Millar hopes to expand Jupiter's Legacy into a fully-realized world. Millar told CBR that he hopes to publish the final issue of Jupiter's Legacy before the year's end, with Quitely on art, before launching into the new timespan in April. After the prequel is published, he elaborated, he and Quitely will launch their second volume of "Jupiter's Legacy."

Millar brings a week's worth of speculation to a close after releasing a page of Torres' artwork and teasing that it belonged to a upcoming prequel to one of his bodies of work. Millar admitted that he chose the specific page as misdirection towards his Superman: Red Son universe. While Millar isn't returning to the Man of Steel's world, Jupiter's Legacy's is far from a consolation prize.