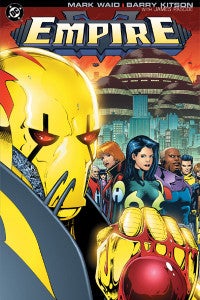 Mark Waid, writer of Daredevil and Indestructible Hulk and co-founder of Thrillbent.com, is conducting an "Ask Me Anything" interview on Reddit today. It's worth checking out in general, but one particular answer stuck out as it pertained to Empire, a creator-owned series that Waid launched in 2003 with artist Barry Kitson. Waid and Kitson had worked on JLA: Year One together, and when Gorilla Comics--the imprint of Image under which Empire was originally published--folded, the pair brought their series to DC. It ran for six issues (plus a zero issue that collected the two Gorilla had printed) and revolved around a supervillain who has successfully defeated all of the world's heroes and taken over dominion of earth, but who nwo had to deal with the practical concerns of ruling a populated world. Of course, the problem with taking a creator-owned book to DC or Marvel is that you frequently have to give up a little bit of your control, if not over the material then at least over reprint and sequel rights. Chris Roberson once explained to ComicBook.com how that related to iZombie, his Vertigo series. Basically, DC can't go forward with any future comics or products using creator-owned characters without the creator's blessing...but the creators cannot take their property and leave DC, either; they have to wait until a certain amount of time has passed since the last new material was published, when the rights will fully revert to the creators. Asked about the potential for more Empire, Waid addressed this issue somewhat. "Wouldn't that be cool? Of course, the rights would have to have reverted back to us," he told the fan. Then he added, "Oh, wait, what's that? They have? Short answer: Yes, you will [see more Empire]."