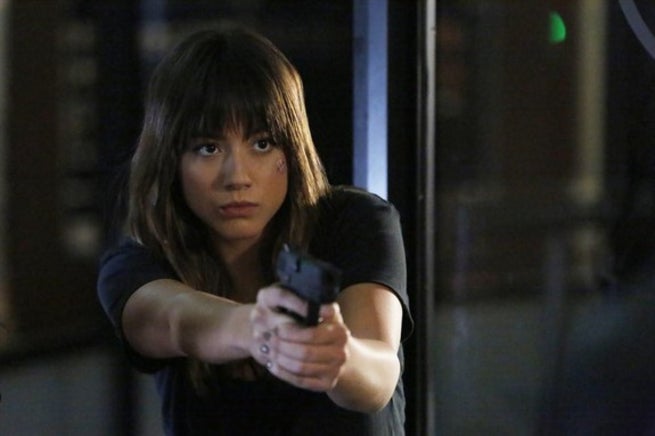 When fans first met Skye (Chloe Bennet) at the beginning of Marvel's Agents of SHIELD, she was a rebellious hacktivist who was brought into the fold against her will. Now, she's almost a completely different person including being a full fledged member of the team, a place Chloe Bennet never saw coming.

With the show primed for major changes heading into tonight's episode, "...Ye Who Enter Here," ComicBook.com caught up with Bennet about Skyes growth, if she still ships #Skyeward, and so much more.

What has the journey been like for you, growing with the character of Skye over the course of last season and this one? There's certainly been a lot of developments, so has that had any effect on you?

I'd like to think, I've grown a ton with Skye. The writers and showrunners have been super generous to me with Skye's storyline and how much growth I've had with her. Just look at how far she's come in the time between the pilot and the first episode of this season?! THEN look how far she's come since even that episode. It's been a blast.

Luckily, we've been able to keep her self deprecation, her sense of humor and all the things that make Skye, Skye. It's been a lot of fun to play her, because her growth is my growth too, you know? We both have that ball busting attitude, and at the same time I've grown so much as an actor thanks to Clark and the rest of the cast.

When we started this show, nobody knew anyone from anything and a lot of us were still very new at this whole thing. Clark and I have had pretty personal scenes together on screen that a lot of that father/daughter mentorship has translated off screen as well. He's been a HUGE mentor for me and my growth in this business so it's a lot of fun to see the interpersonal relationships we have as colleagues, pay off on the show.

Given how far she's come, has Skye left her hacktivist past behind? Are there still reservations about S.H.I.E.L.D.?

I think she has a lot of fun about it. But she's pretty devoted to S.H.I.E.L.D. at this point. In my mind, she's always been drawn to S.H.I.E.L.D. Granted she was against it at first, but deep down she knew in some way she was connected. Now, she's 100% in for what S.H.I.E.L.D. stands for and will do anything for any member of her team.

Did you know where the character was going when you took the role?

I didn't even know I was even in the show past the pilot.

I had three scenes that I knew for sure I was in, but had no idea in what capacity. I mean, I knew what my contract said, but never in a million years did I think I'd have the role I have now.

Have you had to do any comic reading for research as time went on with Skye?

I don't think I've had to, but I definitely like to. I do a bit of reading now and it's something I keep up with. I have to be careful now though. Anytime I'm in a shop people are paying attention to what I'm buying, thinking it might mean something. Luckily I work for Marvel, so they are able to get me what I need.

I've been doing a ton more reading now that there are all these movies coming out. I want to be the person who knows what all the references mean instead of being the person to ask about them.

Do you have any personal favorite characters or creators?

I DO! But I can't say, because then that would be telling, wouldn't it?

Okay changing gears a bit, let's talk about your relationship with Kyle MacLachlan. I know your characters haven't met on screen yet, but what's the interaction been like off set?

I have met him! I can not confirm or deny that I've shot with him yet.

I'm a huge fan of his and the work he's done. It's been awe inspiring to watch him do his thing for his scenes and fans will DEFINITELY be excited with what comes next for his character.

I have to ask you this, because I asked Brett about it. Tell me about the #SkyeWard fans and your favorite thing about them.

I LOVE their commitment to the cause, and that they're getting into it. But, the more that he does, the harder it becomes to redeem himself for it.

Look, at the beginning of the season I really did ship SkyeWard, but now he's pretty much killed his parents, and left his brother for dead, it's getting tough! I don't even know which Ward was right?!

It's hard and tricky to navigate and I find my self getting further and further away from shipping SkyeWard. He's kind of a murderer! I've got to look out for Skye and I wouldn't want her dating a murderer.

So, Skyeward is hitting troubled waters?

Yes. But don't get me wrong, I LOVE Ward's character. Since the end of last season, Brett has done some amazing things with Ward. He's so interesting now and working with Brett is still a ton a fun. Who knows, maybe he's just brainwashed.

As we head into the midseason finale, fans are expecting some major things to happen. Maurissa (Tancharoen) has said that things will certainly never be the same when it's over.

MAJOR. I have to stop you right there and say, yes, MAJOR.

A lot of it seems to be centered around Skye! What's it like to have the show center around you for a major change?

Ha! Sometimes I don't even realize it when it happens. Everyone on this show is putting their all into it, and it's 110% a team effort. I think the storyline affects everyone in different ways, so it'll be nice to see how it changes everything for everyone else.

The show runners have been doing a phenomenal job at keeping the show moving full speed ahead. Everything from character development to plot twists, there is nothing more we could ask for in a show.

Speaking of surprises, are you waiting for another shoe to drop since the big plot twist of Captain America: The Winter Soldier? Or are you braced for impact now?

[Laughs] Oh absolutely. Marvel always has tricks up their sleeve so now I'll be surprised but I won't be surprised that I'm really surprised.

Is there a favorite Skye moment of the season so far?

Her overall growth this season has been a lot of fun. Again, it goes back to the Skye/Coulson moments where now she's a bit more bad ass. So the bad ass moments are the ones I look forward to the most.

There's a moment coming up in episode nine where it required me to train with Ming Na Wen and that was so great. Learning fight scenes has been really interesting in a number of ways. Just the methodology and the physicality of it has been eye opening.

Any memorable bruises? When I spoke to Ming-Na Wen she mentioned losing teeth and wearing her bruises like a badge of honor.

I absolutely got up this morning and groaned. I have a bruised tailbone, bruises down my leg, it's a mess. The press has picked up on my jumpsuit phase, but it's because of all my bruises! It's funny because Clark hates them now which I think is fantastic.

We all walk away with bruises. It's a weird day on set if someone isn't walking around casually without bruises, bloody noses, or sick looking. There will be some days when I'll forget I have makeup on and be walking around Whole Foods and people will look at me like "Oh my god what happened to that poor girl?!"

You mentioned a few times that you really admire the relationship you have with Clark both on and off screen. Would you say that Clark is prepping for you bigger and better things? Maybe Coulson prepping Skye to…take over S.H.I.E.L.D.?

Oh…wow, hey great idea! Let's get that up and running, take it to social media! Skye for Director!

I was very green when I started on the show and Clark has been a huge support system for me when it comes to learning the ropes. Just supporting me and helping me during scenes to bring out my inner Skye.

But as for Skye becoming Director? God, imagine the sorry state S.H.I.E.L.D. would need to be in for that to happen. It would all go terribly wrong.