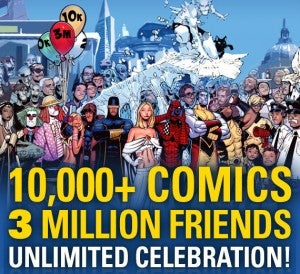 Updated at 10:11pm EST. New information is in bold.

Marvel Comics announced in a press release today that their official Facebook fan page had exceeded 3 million fans. It's an accomplishment they've been celebrating all day with exclusive reveals at the site as well as a Twitter hashtag, #Marvel3Mill. The site just exceeded 2 million back in July. In an environment where social networking is increasingly used as a forum for promoting products and services, Marvel describes the page as a destination for fans to get first looks at "exclusive art from upcoming comics, news, & previews from Marvel video games." To celebrate the achievement, Marvel is offering 30% off its annual Digital Comics Unlimited program to new users who sign up between now and February 23, 2012. This reduces the overall price of the transaction from around $60 for a year of the service down to just over $40. Check out the Facebook page for more details and a coupon code. DC Comics, Marvel's cross-town rivals, have historically had some trouble with their social networking presence and have just over 500,000 fans on their comparable page. Their Twitter pages are much more comparably matched, with DC's 100,000 or so fans exceeded by Marvel's roughly 250,000. Marvel, though, has Executive Editorial Director Ryan Penagos, whose Agent M Twitter account has more than a million and a quarter followers and blows both official channels out of the water. As with the monthly market share, smaller publishers appear to be settling into their own microcosm of the Marvel/DC economy, with 10,000 fans or fewer as the norm and many small publishers right around that level. After a quick survey of major characters, it appears as though the comics property with the largest social media following is The Dark Knight, with nearly 10 million fans, followed by Iron Man (the movie) at a little over 7 million. Beyond that, there is a precipitous drop. It's widely believed that the readership base for American comic books is somewhere south of 1 million people, although no credible study on the question has ever been performed. With an industry that's frequently characterized as preaching the converted and selling to an ever-diminishing audience, an expanding social media presence that allows the publishers to advertise directly to potential readers' Facebook pages, and hopefully to be seen by those people's friends and so on, is not an insubstantial commodity. Marvel has been historically more able to consolidate its fans under a single umbrella, with a single account that provides all the necessary news, whereas DC's "Vertigo Firewall" in the comics has a similar analog online with imprints like DC Nation, Vertigo and formerly WildStorm all carrying their own websites and social media sites that don't necessarily feed Batman news to the readers of iZombie, for example. Until DC's recent New 52 initiative launched in September, Marvel had been considered the undisputed industry leader in terms of sales and market share, as well as TV and movie tie-ins and most forms of ancillary media, for a number of years. DC has come roaring back in the comics industry and with a number of projects in the pipeline--including a DC Nation block on Cartoon Network and pilot orders for Green Arrow, Booster Gold and more--may be positioned to make a run at Marvel's movie empire, although they'll have an uphill battle since The Avengers hits theaters in May and any potential Justice League movie is probably still a decade away.