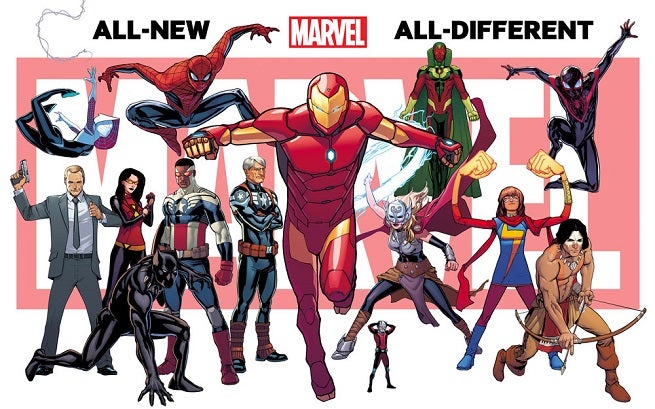 The report indicates that Marvel will again renumber everything with new #1s, which isn't all that surprising a move given the recent history of Marvel's rebranding.

"We've been planning it for years," Marvel Editor-in-Chief Axel Alonso told Mashable. "We realized that [Secret Wars] would be a game-changing moment that would allow us to create a big white canvas. It's an unprecedented chance for us to tell new stories across all titles with new number ones."

So...what do we see here? Who are Marvel's representatives to the general public as this press release and image go live to places like the New York Post and USA Today?

Spider-Gwen - No surprise to see her here; one of the most popular new characters Marvel has had in years, and with a title that launched so soon before Secret Wars that it almost seemed like an odd choice.

What's interesting, of course, is that after all the multiversal upheaval, this looks like Spider-Gwen will be in the main Marvel Universe rather than returning home!

Spider-Woman - Another recently-launched Spider-hero gets some facetime here, although for reasons that aren't entirely clear (maybe to line her up with S.H.I.E.L.D.?) isn't lined up at top like the other "Spiders."

Black Panther - T'Challa gets face time here, suggesting that he'll play a major role in the comics just as he will in Captain America: Civil War shortly after the launch of the All-New, All-Different Marvel.

Spider-Man - Peter Parker is here, which is probably mostly to make sure fans don't freak out about the presence of somebody else we'll see later on...

Captain America - It appears as though Falcon will continue to be Captain America -- marking one of a number of recently-christened "substitute" heroes who are represented on this image, suggesting that they won't be replaced post-Secret Wars as many fans expected.

Steve Rogers, Super-Soldier - And here's the man who helped train Captain America to be ready to take over the mantle -- the original Captain America, back in the "Super Soldier" costume he wore following his return from the dead.

Iron Man - Another new #1, another new suit of armor for (we're guessing) Tony Stark. He's not so Apple Store-inspired anymore!

Ant-Man - Once again somebody who will be featured on the silver screen soon, it's no surprise that Ant-Man is being positioned as a character to watch coming out of the big event.

Jane Foster Thor - This one is a little bit more surprising, if only because she kind of fits into the Falcon/Cap mold: a lot of fans expected that Jane Foster's time with the powers of a thunder god would be pretty limited, especailly now that the mystery of her true nature has been revealed.

The Vision - The Vision was the standout of Marvel's Avengers: Age of Ultron and is one of a number of characters planned to appear in Captain America: The Winter Soldier who is reported to be getting a big push post-Secret Wars.

Miles Morales - Yeah, we know that Peter is still alive, so we'll have TWO guys by the name of Spider-Man in the Marvel Universe. But what will their relationship be like? With all the time and multiverse travel, will they remember Spider-Men?

Red Wolf or American Eagle? - We're guessing Red Wolf, on account of the design he has on his skirt/loincloth (is there a better name for this? We're not sure) and the mostly-obscured face. But there's not a lot to work with. He doesn't look much like the traditional costume of any Marvel Native American hero. Update: A report in USA Today confirms that this character is indeed a 21st-century version of Red Wolf.

Where to Watch A Charlie Brown Christmas This Year