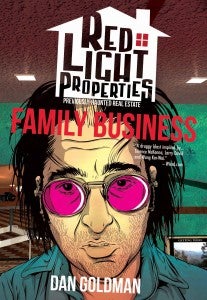 Eisner-nominated cartoonist Dan Goldman will bring his award-winning Red Light Properties to Monkeybrain Comics for digital distribution, according to a statement just released by the publisher. The partnership will launch officially with tomorrow's new comics, and a trailer for the titles can be seen below.

“I’ve been a huge admirer of Dan’s work since the launch of the ACT-I-VATE site in the middle of the last decade,” Monkeybrain Co-Publisher Chris Roberson says, “but I wasn’t prepared for just how amazing Red Light Properties would be. I think that Dan really is doing some ground-breaking and boundary-pushing here, helping to evolve the medium. And telling some fantastic stories along the way!”

Red Light Properties is a supernatural drama-horror series about a firm that deals in haunted real estate, was originally commissioned as a serial by Tor.com, but Goldman has continued and expanded it as an ongoing digital-first comic series. The series has earned praise from critics, fans and fellow writers like Cory Doctorow, who said, “Goldman's ghost stories made the hairs on the back of my neck prickle." There is already over 300 pages of content created for the series.

The series will be offered in English, Spanish, and Portuguese language versions, available for purchase and download via ComiXology’s site and apps. 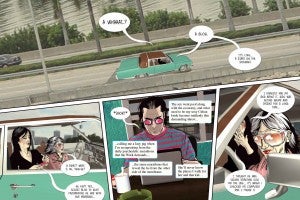 "The chance to bring Red Light Properties over to Monkeybrain Comics is something I jumped at because Chris Roberson and Allison Baker get it. They've taken the very simple idea of Great Creator-Owned Comics Selling for What They Should Cost and turned it into a mission statement with its own seal of quality," said Goldman. "As a solo creator and self-publisher, I've already had the flexibility to publish my comics on the web, sell them as PDF/CBRs or on ComiXology/ Kindle/ Nook/ etc., but what's harder to build with just one person is a community, and that's what Monkeybrain excels at. People who buy and read Monkeybrain Comics are taking an active part in supporting a creator-owned digital comics movement that's only just beginning. Having my own beautiful brain-babies be a part of this change in comics-culture is the purest way for me to support what they've helped to manifest."