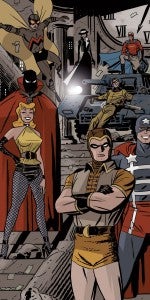 When Before Watchmen was announced and each storyline got a single cover image, it left fans wanting a little more from artist Darwyn Cooke, whose cover for Minutemen featured only Nite Owl, one of the most popular and visually interesting of the group, but left everyone else out. From a visual perspective, many fans are more excited about seeing what Cooke, whose work includes DC: The New Frontier and the recent adaptations of Richard Stark's Parker novels for IDW Publishing, can do with the world of Watchmen than any other artist involved with the project. Well, fans have seen a little more now. Thanks to an interview with Alan Moore conducted by Fast Company, a full group shot of Cooke's Minutemen is now making the rounds on the Internet. While many fans and critics, notably Tom Spurgeon of The Comics Reporter, have sided with Moore in his crusade against DC Comics and Before Watchmen, one of the things Moore has done in recent times to rile fans was to suggest that the comics community is creatively bankrupt and seemingly imply that there are no great talents working in comics these days. Moore clarified that position a bit in the Fast Company piece, saying, "There's been a growing dissatisfaction and distrust with the conventional publishing industry, in that you tend to have a lot of formerly reputable imprints now owned by big conglomerates. As a result, there's a growing number of professional writers now going to small presses, self-publishing, or trying other kinds of [distribution] strategies." Even so, Moore seems to remain confident in his position that Watchmen is still something unlikely to be duplicated or improved upon in mainstream comics. "I would have thought, from a DC perspective, that's it's a lose-lose perspective, unless they did something better or as good as Watchmen," the author told Fast Company. "But realistically, that's not going to happen, otherwise it would have happened before."