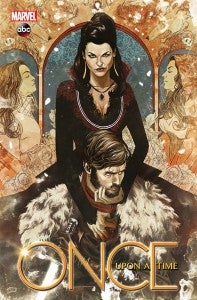 Just two weeks after Once Upon a Time: The Shadow of the Queen original graphic novel was announced by Marvel Comics, TV Guide has details of the release, including a first look at the cover, shown at left. "We wanted to explore some new narrative territory that the show hadn't fully covered yet," said Emily Shaw, who is editing the book. "The Huntsman was perfect. Fans love him, he's such a compelling character, but his background is still pretty mysterious. Especially when it comes to his servitude to Regina, the Evil Queen." The story was developed by Dan Thomsen, a co-producer on the TV series, Thomsen co-wrote the graphic novel with Corinna Bechko. Malavia, Vasilis Lolos, Mike Del Mundo and Mike Henderson will provide the art, and the cover is by Malavia. The book is set in Fairy Tale Land following the events of the Season 1 episode "The Heart is a Lonely Hunter," in which The Queen had taken the Huntsman prisoner. The Evil Queen has, quite literally, captured the Huntsman's heart -- and now he's her slave.  This is the never-before-told tale behind their twisted relationship -- and what happens when a good man is forced to do bad. When Regina cooks up yet another devious plan to capture Snow White -- this time by allying with a pack of power-hungry werewolves -- the Huntsman comes face-to-face with his past -- and an independent spirit in Red Riding Hood that just may match his own.  Can these two break free of the forces that bind them and save Snow White?  When put to the test, where will the Huntsman's loyalties lie?  Has the Evil Queen stolen his heart in more ways than one? "The Evil Queen is still on a rampage to destroy her nemesis," Shaw told TV Guide. "We'll get to witness some important events from the Huntsman's past. Events that define him as a character and explore a new side to his relationship with the Evil Queen." Shaw told the magazine that a great deal of attention went into crafting the look of the book, which will primarily star the Queen and the Huntsman but will feature other characters from the hit ABC show as well. "We want the book to be immediately recognizable to fans," Shaw said. "Obviously, the actors are a huge part of that. They're the faces of the show. So we want to be true to the flavor and personality of our characters, while still allowing our artists stylistic freedom to express themselves."

Once Upon a Time Graphic Novel Details Revealed