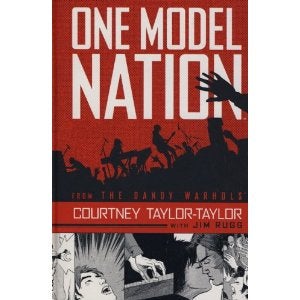 In the ever-evolving world of comic books and their integration and crossing over into new realms and new genres, a new installment hits store shelves on Tuesday in the form of One Model Nation, a graphic novel that focuses on the mysterious disappearance of a band in the late 1970s with the Red Army Faction (also known as the Baader-Meinhoff Gang) part of the action, with a Cold War Germany the setting for much of the action.  The author of this narrative is frontman and lead lyricist of the Portland, Oregon based alternative band The Dandy Warhols Courtney Taylor-Taylor.  Taylor is not the first, and certainly won't be the last, musician to straddle the line between music and comics, but he is one of the more rare exceptions in that he is able to craft a dense and knotty story that drives along at a pace that reveals an interesting sense of history and domineering rule with characters who feel very much human and realized. Illustrated by artist Jim Rugg (The Guild), the story shows us a suspicious and deeply tense Berlin of the 1970s, where band One Model Nation becomes embroiled in the unrest of the day, when every young person is a possible anarchist and the notorious Baader-Meinhoff are at their peak.  The main tale is told in a frame story, one that Taylor sets up by presenting us the question of just what did happen to the band, one that seemed so popular and edgy for their time, and according to a line in the book, they were portrayed as the, "figurehead of a terrorist generation."  Taylor does a nice job of setting up a tale where music plays such a role in unifying youth, much like other movements such as Woodstock did in the 1960s, and the police see the music as a threat to their monolithic control over the country, and Rugg's artwork pairs up nicely with this.  The pacing does dip at times, as many pages feature a nine-panel structure, which can slow things down a bit.  However, the concert scenes, which are subversive in tone and presentation here, are nicely done and feel authentic in tone.  A good portion of the credit for that also goes to Jon Fell on colors, as a somber tone of oppressive grey washes over much of the book, save for the concert panes which are lively and colorful. As the story starts to go on, the band finds themselves further and further pulled into the drama, and as a major concert looms, tension and clashes explode in a quite busy last few pages that brings the graphic novel to a surprising end.  When the reader snaps back to present day, more questions than answers seem to linger, and Taylor's story feels appropriate to end in the way it seems to begin, with suspicion and doubt.  There's are not terrible things, as the mystery and the political overtones are certainly ones that resonate even today.  Taylor is quite adept at presenting the marriage of music and its power to galvanize a crowd or a population with a movement or mindset.  Helping that is the book's pop art feel, which Rugg captures in his characters' expressions and emotions set against a stark and bleak landscape of harsh lines and bare edifices. Also included in the book are several extras such as featured artwork, a sketchbook by Rugg, and commentary by Taylor himself.  The story stands up overall on its own merits, and fans of the role that music can play in youth culture will appreciate the effort made here by the entire creative team.  One Model Nation goes on sale Tuesday, January 31st!

Dwayne The Rock Johnson Says Presidential Run is "Off The Table"