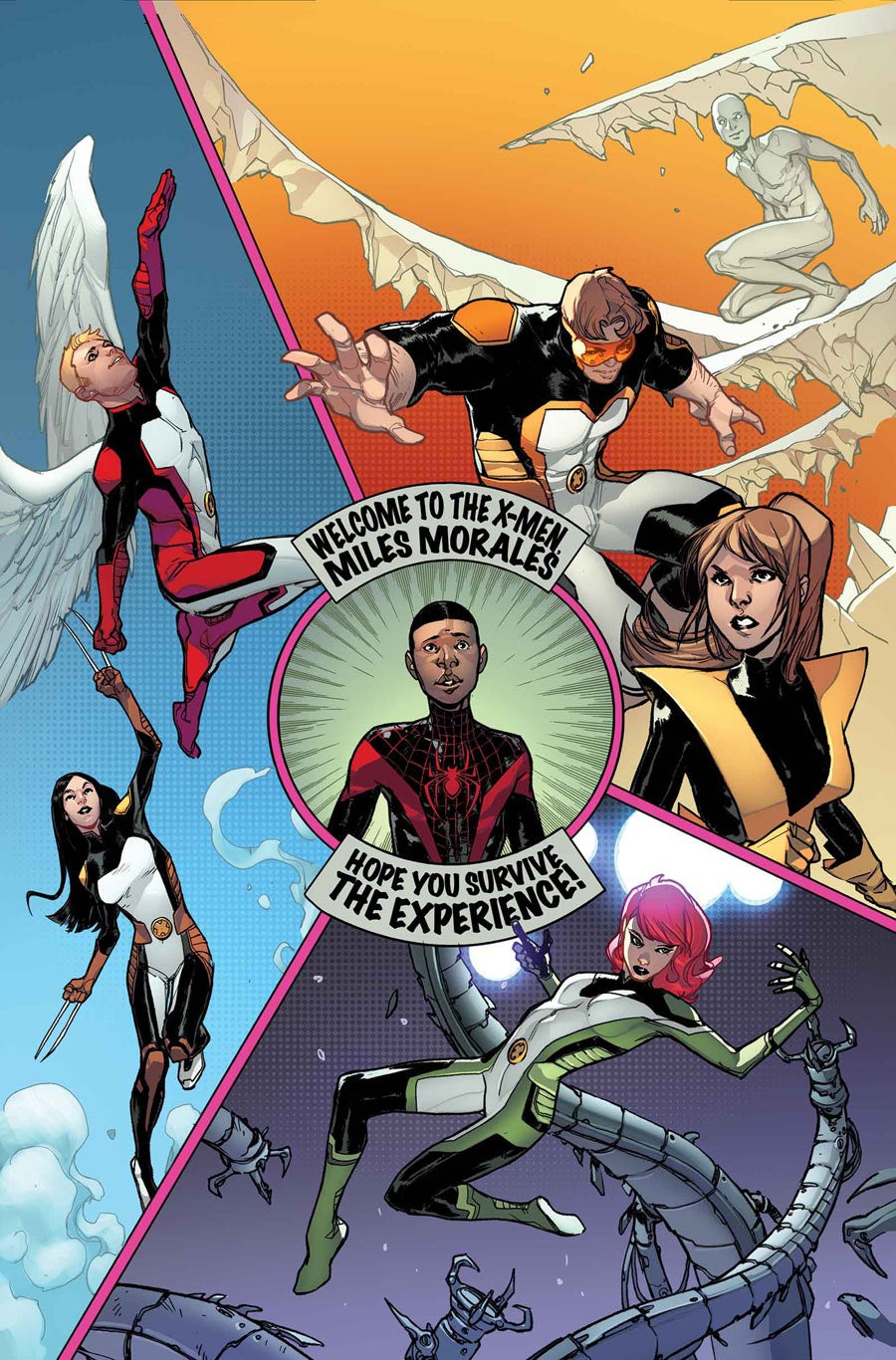 Brian Michael Bendis and Mahmud Asrar created an interesting challenge for themselves at the end of All-New X-Men #31. The five young X-Men who star in the series had all been placed in alternate locations and time periods. They had effectively split the comic into five separate stories. For Asrar, it is an opportunity to create a wide range of settings. He summons distinctive backgrounds with ease and just as capably shifts between action sequences to others based primarily in conversation.

Bendis has trouble maintaining pacing and momentum between all five stories though. In the best of these stories, Bendis and Asrar establish both a setting and antagonist. Those two components serve as an effective introduction to whatever challenges each X-Man will face. However, not every story manages to accomplish that much. Angel is only established in a clear place, but the actual conflict present within that setting (besides the obvious need to return home) is unclear. X-23 is given a clear group of antagonists, but their motives or ability to threaten her are limited, if existent at all.

Iceman, Jean Grey, and Beast are all presented in situations where both the setting and potential conflicts are clear. That allows for their stories to carry some weight as drama is built from those elements. The mysteries surrounding their other classmates though leave more room for questions than drama. It's a careful balance to maintain momentum in five separate tales in a limited space, but it should not be impossible.

Of the five story threads, the most attention is paid to that of Jean Grey who is occupying the Ultimate universe alongside Miles Morales (a.k.a. Spider-Man). Their interactions are a highlight for the issue. Jokes and banter come naturally from both characters. It is clear that Bendis has a flair for writing these personalities and enjoys putting them in a room together. Morales has been a fan favorite since his debut and one of the reasons why is made clear here. Under Bendis' pen he fits naturally into a story that is not his own, flexible and fun to watch even as a supporting player.

A two-page spread is provided to introduce readers unfamiliar with Miles Morales to the character. It's a nice looking set of pages with a collection of panels displaying important moments from Miles' history based on having his mind read. Colorist Marte Gracia emphasizes the primary elements of Miles' costume using only reds, whites, and blacks.

While it might work as a poster for fans of the character, it fails as a storytelling device. The memories are fractured in a circular pattern with no clear direction in which to read them. Early memories appear in the top-left, while more recent events appear in the bottom-right. That is the full extent of visual indicators provided though. The collected images fail to cohere into any story. A reader lacking previous knowledge of Miles Morales could not be expected to discern many notable details from this sequence. If this were the 32nd issue of Ultimate Spider-Man that would be acceptable, but this is the introduction of a brand new character to All-New X-Men. In that context the panels are effectively a collection of non-sequiturs.

The characterization of these young heroes is excellent still and it's enjoyable to watch them interact under Bendis' words and Asrar's images. However, the clunky introduction of a new character and fractured stories detract from that experience. All-New X-Men #32 is an uneven collection of beginnings ranging from the exciting to the confusing.

Marvel's Avengers Reportedly Will Not Have New Content After 2023