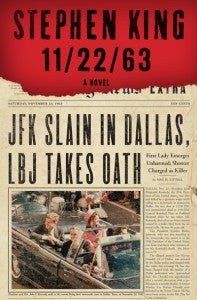 Stephen King's new novel, 11/22/63, hits stores today after what's reportedly a decades-long wait. According to the author, he actually came up with this idea before writing his breakout novel Carrie in 1974, but decided against writing it at that time, figuring that it would require more time than he had for research and more skill than he possessed as a writer. It's probably for the better that it did. Like his massive and recently-released novel Under the Dome, the book certainly benefits from King's expertise, and from the changes to his writing style since. The end result is a novel that's smart, fun, engaging and relentlessly entertaining. Maybe not worth a thirty-year wait but still one of the best books of the fall, and one of the better books in King's recent canon. Over the years, King's stories have become less about the great setup and more about character, and that's what gives 11/22/63 its life. A complex and deeply-researched book such as this also benefits from a lack of early King's notoriously flowery descriptive passages. Here, the areas where King and his assistants have done a great deal of research to provide historical context and accuracy really shine because he doesn't spend a paragraph and a half describing the way our hero's hand looks while resting on the nightstand. The story revolves around Jake Epping, an English teacher and self-professed "babe in the woods" politically who is convinced by a friend to undertake an improbable and spectacular act of political engineering. Having found a Being John Malkovich-style pathway through time that leads to 1958, Epping's friend Al (probably not the same Al who guided Sam Beckett through his Quantum Leaps, but I like to pretend it is) talks him into using the pathway to travel to the past, establish himself a residence with money he can win by betting on sporting events whose results he already knows, and lie in wait for five years before stopping Lee Harvey Oswald from killing President John F. Kennedy. (For the purposes of this book, let's just dismiss conspiracy theories and assume that Oswald is guilty. King's characters do, and it makes the rest of the book much simpler.) Even during its long downtime, this concept has clearly been something that King was never completely able to abandon; back in 2007, King expressed a similar concept as a potential comic book story to Marvel Spotlight magazine, describing the story almost to a T; he also mused about the ability of using time-travel to halt the Kennedy assassination way back in The Langoliers, the first part of his four-part, 1990 novel Four Past Midnight. One of the areas where King's work shines here is that he sets up, and then abides pretty well by, his own time-travel rules. One of the most important aspects of time-travel storytelling is to be consistent in the way those rules are applied throughout the story. The version King uses is something of a modified version of the "solid time" concept that Geoff Johns, Jeff Katz and Dan Jurgens used in Booster Gold, Volume 2; the more significant any given moment, and the more damage its alteration would do to the timestream, the more difficult it is to change, setting up a dynamic where Epping is trying to take on a nearly-impossible task. Along the way he does a number of other things intended to make the world a better place for his friends and loved ones, with mixed-to-terrible results. At its heart, 11/22/63 is both a smart work of historical fiction and a morality tale that questions the wisdom of simple men--even those with good intentions--trying to play God. As an aside, Bleeding Cool is reporting today that Y The Last Man and The Escapists author Brian K. Vaughan has signed on to write the script for a TV version of King's aforementioned novel Under The Dome for Showtime.