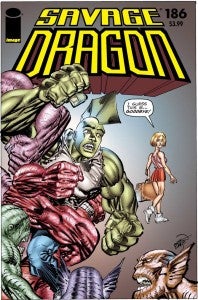 This article is a commentary track on Savage Dragon #186 and meant to be read by those who have already enjoyed the issue. If you haven't, why not buy it here and check back with us?

Lots of stuff happened this week, so we're going to just get right into it with Savage Dragon perpetrator Erik Larsen. Thanks as always to editor Gavin Higginbotham for contributing, and be on the lookout for an interview with him later this week about his backup feature in today's issue. I love this cover--it reminds me of a Silver Age cover, something you'd see on SuperDickery or something. I like covers that tell a story--or part of one. I miss those. Yeah, this had something of DC vibe to it with its "who cares about you? I've got places to go" attitude. Man, you didn't think about it so much when there was an OverLord around because it felt like eventually he'd win...but this is quite a sustained power vacuum in the Circle. Will Claw be definitively taking over for a while? Time will tell. I'm a bit hesitant to say one way or the other at this point. And just because we haven't been told who's in charge at this point--it doesn't mean that there's no leader. There is a guy running the show...we just haven't seen who that is just yet. The group doesn't function well with nobody in charge. Even if it's a group of lieutenants--somebody's calling the shots. 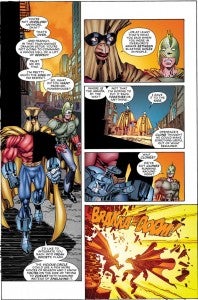 Will we continue to see Angel or are you going to give her a bit of a break? I could understand it either way. I'll touch in on her in a few issues just to see how she's settling in but for the time being--she's out of the picture. I want to get across that she's no longer part of his world and having her be a presence in the book doesn't really sell that. We can't miss her if she doesn't go away. Man--even in the world of Savage Dragon, GI Joe: Retaliation needed an extra nine months to finish up their reshoots. In all seriousness, though, is it important to be timely even though you're presumably writing these scripts months in advance and not really thinking of the GI Joe movie at the time? It's part of the gig. And tying in the book to actual happenings gives it a specific time. The trial, which took place in the previous issue, covered a lot of ground and took a while to play out. This lets us know that we've caught up. And it's the kind of thing which is easy to slot in. If there was another movie out then I could have easily swapped in something else. Holy crap--the Tyrrus Combine appears to have made short work of the Krylans without Dragon there to help. Not sure they would have fared much worse had he been there. Sure, he could have taken out a few of them but 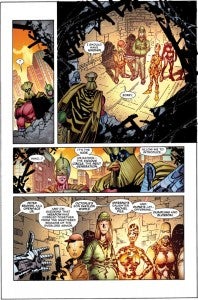 Is that Krull in the foreground with most of his body missing? It is. And his head split open. What was the idea behind taking those characters off the board? I didn't want a happy home Dragon could return to. I had done as much with it as I wanted to do. When you juxtapose that gore against Claw's attack on the Circle, it's effective--but do you worry about confusing readers? Or has the old "Every issue is someone's first" gone by the wayside these days? I thought the last page of the story covered what we needed to know in regard to that and that it clearly took place elsewhere--it was obviously not on earth. I do try to catch readers up to speed on things so any individual issue isn't too confusing. The yellow menace crack just had to make it in. Love it. Careful. You really wasted no time at all getting Daredevil and Claw face to face, huh? It's what they do. The two had a few famous battles. Getting them back together seemed the way to go. 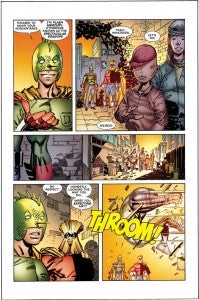 Have you been following what they've done in Project Superpowers to try and steer clear of their take on the characters you use from the public domain or do you just figure that by having your own unique take you just write what you know and don't worry about it? I haven't read a word of that book and it's better that I don't. Not that I think it would influence me...but I'd rather not take that chance. I'm not really interested in reading other people's takes on the characters. Those aren't part of my world and will never be--so what's the point? With the last of the Krylans coming to repopulate and Claw on a rampage, it seems like a really bad time for Dragon to be in jail. Do they do work furloughs for that kind of thing? Not for guys convicted of multiple homicides, no. With this issue we see a departure from hand lettering. Was this a tough decision? What were the factors in making it? Tom Orzechowski contacted me to say he was booked solid and couldn't start for a couple weeks and I couldn't wait that long. It was not a decision made lightly. I like lettering on the boards. At the same time--I like having my book come out on a more regular basis and it's gotten to a point where I just can't do that if I'm going to insist on getting books hand lettered. Powerhouse and Flash's friendship continues to build. Could we possibly see a dual leadership of the VC? Both have led the group before. Could they succeed together where it may not have worked so well alone? By all accounts, Powerhouse DID used to lead the VC pretty well. I don't see that playing out quite that way. Both were trying to make freaks more respectable and trying to clean up their act and the others aren't down with that so much. 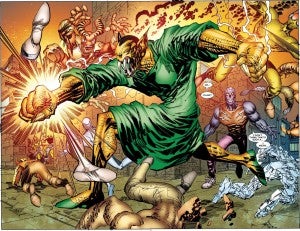 The second generation of the Vicious Circle! We've seen several heroes reproduce but only a handful of villains. Here's a whole lot more! What prompted you to choose these particular villains to have offspring? Their fathers were all key figures who appeared early on. It just seemed to be the best fit. We'll see more offspring in forthcoming issues and plenty of new characters. Was The Claw this badass back in the Golden Age? It makes you wonder how Daredevil ever could have killed him. Just how did he manage it in the past? He didn't! The Claw's death was more of an afterthought, really. One of the things Charles Biro did on Daredevil was consciously push his own characters and downplay those he didn't create. Daredevil himself became a supporting characters to the Little Wise Guys almost immediately after they were introduced and as time went on his role was further diminished until he vanished altogether. While much was made years later about the popularity of the Little Wise Guys and how they eventually took over the book it's no wonder given the sorry treatment Daredevil was given. I can see why fans tired of him--he wouldn't do anything other than give a lecture or drive a car and that was especially odd given that he was dressed in a colorful outfit all of the time. Ditto the Claw. The Claw was bumped off unceremoniously in a back up story in Daredevil Comics #31 by a couple of other non-powered characters armed with special weapons. Angel and Daredevil finally resolve their long fixation on one another. And now they're apart already! Is this "the end" of their budding relationship? Time will tell. She's moving away. She's still young. They both have time.

Dead to Me Final Season Trailer Released by Netflix