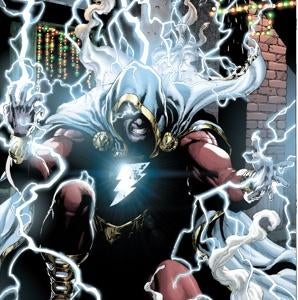 When Shazam makes his first appearance since the DC Comics relaunch in the March 21 issue of the publisher's best-selling Justice League title, the world's mightiest mortal will have a decidedly more fantasy-inspired look on the page. "You'll notice that SHAZAM! looks different from many of the other heroes we've seen in DC COMICS-THE NEW 52," said editor Brian Cunningham at The Source, DC's promotional blog. "That was definitely intentional. His powers come from a different place, and we wanted to see that reflected in the design. We've removed the "circus strongman" elements from his costume. Rather than a traditional cape, he wears a cloak with a hood; there's more of a mystical, magical, fantasy feel to that." The charater's appearance, which is already sparking some debate online, made its debut at a story in the online edition of today's New York Post. In that interview, writer Geoff Johns told the paper that Captain Marvel's "place in the world will be far more rooted in fantasy and magic than it ever was before." Johns went on to tell The Source, "With Shazam! Gary and I will be focusing on the magic hero instead of the super hero. For centuries, science has ruled the world, but now magic is returning. We're telling the story of the hero's young alter ego, Billy Batson, a foster kid at a crossroads in his life. The question is, how does the emotional journey of this troubled teenager collide with the fate of the world? The Rock of Eternity and the legacy of SHAZAM! will be explored in a different way as the extent of Billy's connection to the magic world around him is greater than ever before. The story will have a profound impact on Justice League later in the year and you'll see new characters, locations and creatures along with the classics from the SHAZAM! universe. Billy's friends and enemies will be along for the ride." The character has been in a state of nearly-constant flux since the end of his last ongoing monthly, The Power of Shazam!, in 1994. DC has never seemed to quite find a place for he and his "Marvel family" in their shared universe. The company acquired the rights to Shazam, previously named Captain Marvel ("Shazam is the word most associated with the character, so we just felt it made sense — a lot of people already thought that was his name, anyway," Johns told the Post.) in 1972 from Fawcett Comics, making him a non-native to the DC Universe in the same way that characters from Charlton and WildStorm are. Many of those characters have also traditionally been difficult to integrate into the DC Universe proper. In 2005, Johns incorporated the Marvel family of characters into Infinite Crisis, touching off a series of controversial and unpopular changes that included killing off the wizard Shazam and replacing him with Billy, and then allowing Captain Marvel Jr. to step into the role Billy vacated while Mary Marvel, the group's sweet-natured girlscout, became a fetish-gear-wearing lackey of Darkseid. The subsequent Trials of Shazam miniseries by Judd Winick and Howard Porter was widely criticized by fans of the character, and failed to connect with new readers, and the Marvel family appeared to have been taken off the board for a short time before the relaunch. A movie version of Shazam was rumored to be in the works with The Rock attached to star, but that project seems to have imploded when the writer left in 2008. Recent rumors have had the film version canceled and development on a TV series beginning instead. If that were to be true the character would join other second-tier DC characters like The Spectre, Deadman and Booster Gold in vying for life on TV.

Shazam Gets a New Costume For The New 52