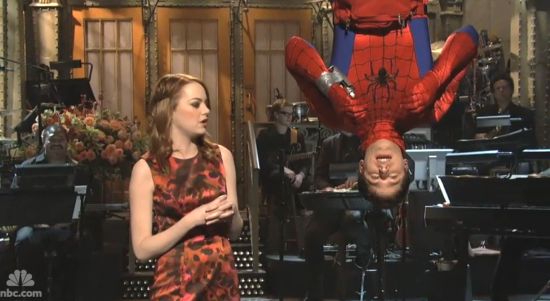 Spider-Man made a surprise appearance on Saturday Night Live last night. As Emma Stone was delivering the opening monologue, Spider-Man dropped in upside down. Ok, so it was actually Andy Samberg dressed up as Spider-Man, but he delivered some hilarious lines about the upcoming Spider-Man movie. Emma Stone is set to play Spider-Man's girlfriend Gwen Stacy in the Amazing Spider-Man movie, which is set to open on July 3, 2012. Stone described her character as "a dynamic and brilliant science student," while saying Spider-Man's other girlfriend Mary Jane Watson was "a skank and doesn't love him like I do." Andy Samberg made his pitch for playing the part of Spider-Man. Samberg read a scene with Stone, and then Stone asked if he was just re-doing the same monologue that Kirsten Dunst did ten years ago. In the best line of the clip, Samberg replied, "Yeah, aren't you just re-doing the exact same Spider-Man movie from ten years ago?" Before the end of the segment, Emma Stone called Andrew Garfield on stage. After Garfield revealed he's been cast as Spider-Man, Samberg exclaimed, "He's British. America's suffering record unemployment and we outsource Spider-Man to England." Check out the full clip below.