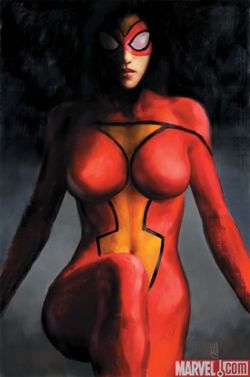 Marvel Comics has released some more information about Spider-Woman's return to her own comic book. After being kidnapped, impersonated and turned into public enemy number one, Spider-Woman is determined to get revenge. The new series will follow Jessica Drew (Spider-Woman) as she attempts to reclaim her life. The enigmatic Agent Brand and the S.W.O.R.D. agency will also factor into Jessica's new plans. Spider-Woman #1 is written by Brian Michael Bendis with pencils by Alex Maleev. The first issue will feature covers by Maleev and also superstar artist Alex Ross. Spider-Woman #1 is scheduled to hit comic book stores on Wednesday, September 23, 2009. In addition to getting her own comic book, Spider-Woman will also star in the debut of Marvel's first ever original motion comic. The Spider-Woman motion comic is scheduled to hit iTunes on August 19th. The first episode will debut on iTunes at a special price of 99 cents for the first two weeks. But after the first two weeks, all episodes will be $1.99 each. In all, Marvel plans to release five episodes of the Spider-Woman motion comic.

Spider-Woman Back In Her Own Comic Book And On iTunes