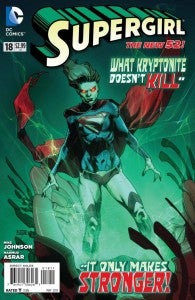 Today's Supergirl #18, while solicited by the normal creative team of Mike Johnson and Mahmud Asrar (whose names still appear on the cover of the issue), was in fact written by Edgar Allen Poe Award-nominated screenwriter Frank Hannah, whose 2004 film The Cooler also won a battery of awards for its stars. Don't expect any major changes to what has already been announced for the title, though. DC Comics confirmed that Hannah is the guest writer for #18. This is the first major comics work for Hannah, whose work has taken on a more action-oriented slant in recent years (he wrote Hunt to Kill and Damage, both of which have been released over the last four years and starred former WWE standout Steve Austin). Asrar, who was also off the book this month (replaced by Robson Rocha), confirmed via Twitter that he'll return in May for Supergirl #20. That still leaves April's #19, solicited by Johnson and Asrar, up in the air. Issue 20 will also see the beginning of incoming writer Michael Alan Nelson's run, so unless he's back next month, or there's another change, it could be that Johnson (who has co-written or written Supergirl since the New 52 relaunch) is already done with the title.