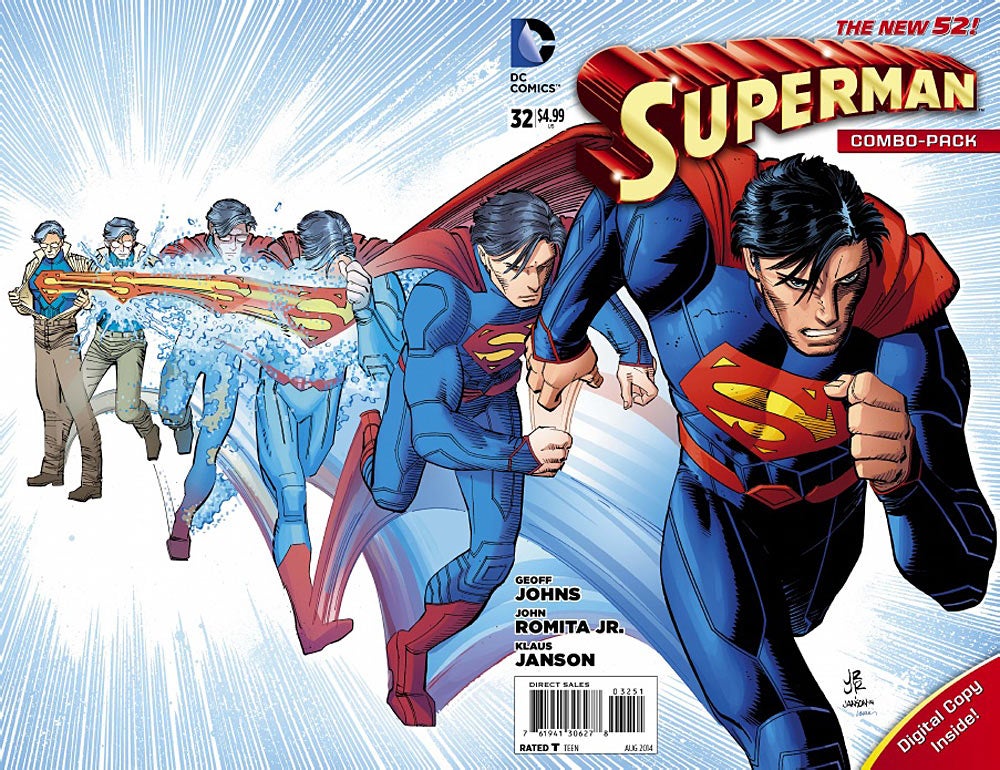 Undoubtedly the biggest comic of the week is Geoff Johns and John Romita, Jr.'s first issue of Superman which (thanks, DC!) was made available via Barnes & Noble's Nook at just after midnight on the East Coast.

Teased throughout the mainstream media and boasting Romita's first non-crossover, non-pin-up work for DC, the issue brings DC's biggest star together with one of the defining Marvel talents of the last forty years and produces a really well-done comic that's unfortunately a slow burn toward a reveal that you see coming on page one.

Yeah...we're getting that out of the way up top, becuase the concern is big, and it's obvious, but the comic itself is quite good. 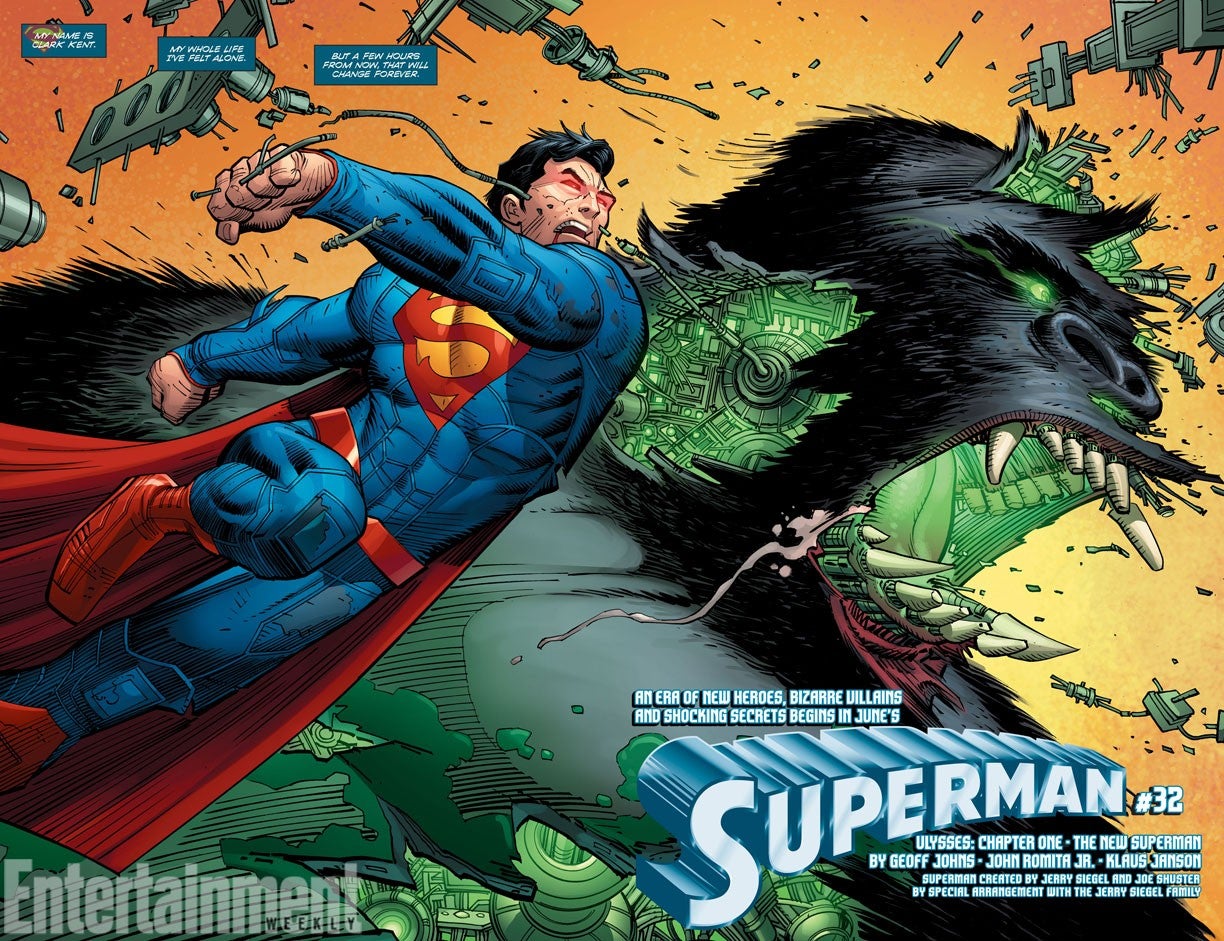 It will likely play much better in the collected edition, but the single issue suffers from an ending that's not only fairly easy to see coming...but which has been done before...recently.

In Adventures of Superman, the weekly, digital-first anthology series featured a couple of different variations on the same theme that Johns employs here...and those stories are fresh enough that they're difficult to ignore or forget.

(That the first story arc the pair are doing -- "The Men of Tomorrow" -- is reminiscent of another recent storyline, Grant Morrison's "The Men of Steel"is humorous but not quite as distracting.)

That's a very plotty concern, though, and the strong suit of this issue isn't plot, it's character...and it's about time. 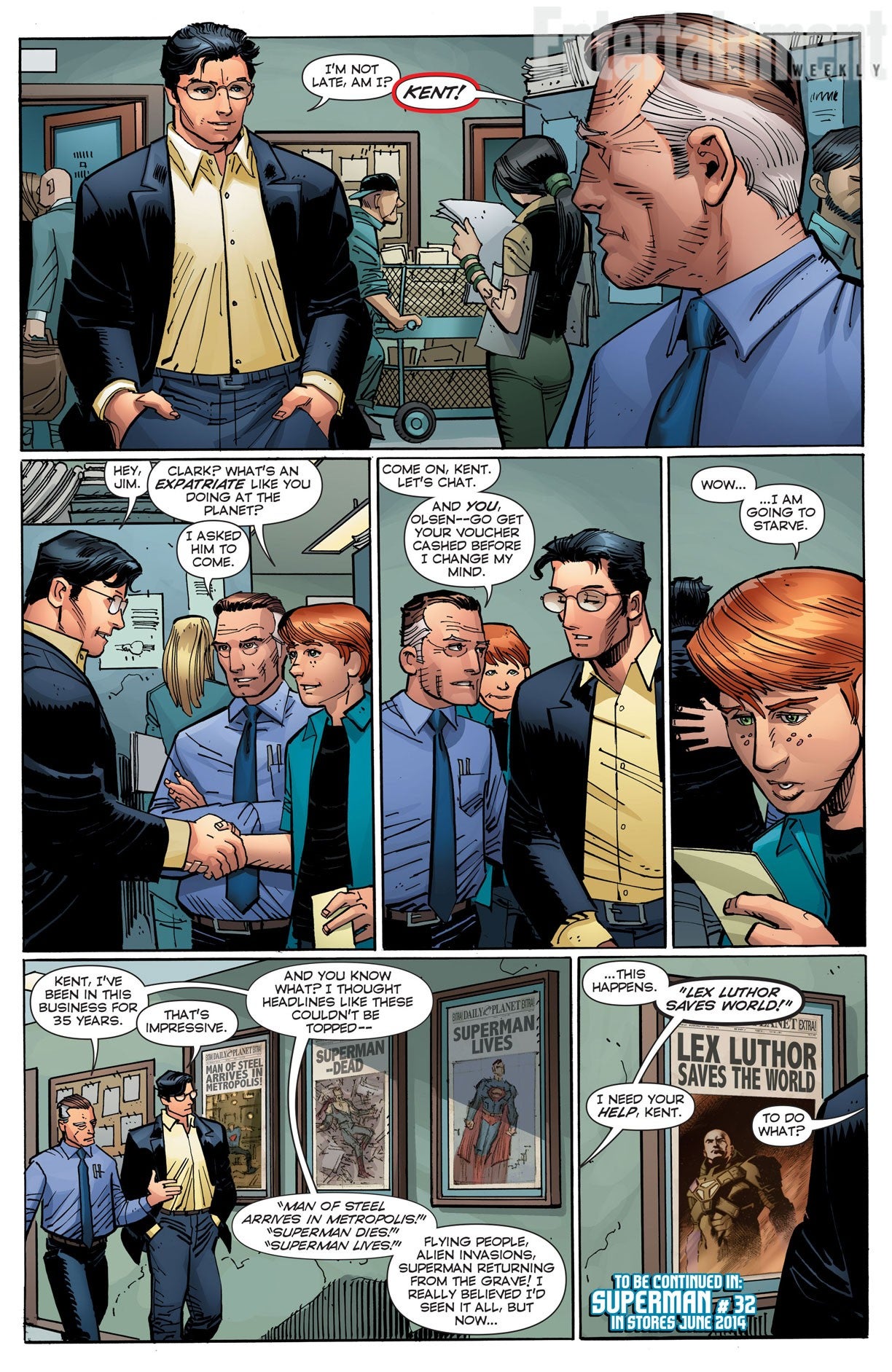 Since the launch of the New 52, there hasn't been a lot of focus on character building in books featuring some of the A-list superheroes, who have been preoccupied mostly with matters of galactic importance more or less all the time. Both George Perez and Dan Jurgens tried, during their runs, to get some humanity in to the comic...and they were criticized by fans for it. If Superman is to be distinguished from any other title he appears in, though, it should be by employing his humanity, his relationships with people...and when Perry implores Clark to do so in this issue, he's speaking for those of us who feel that maybe the never-ending event cycle of Big Two comics has stripped the heroes of something really fundamental in stealing so much time from their supporting casts.

It seems the creative team is in agreement, as John Romita, Jr. tells the readers in backmatter that he wants to make sure to explore Clark's humanity, and that the Daily Planet, which Clark had previously quit, was a setting they hope to explore more.

"The fun part is the characters in the Daily Planet," Romita told DC Comics in an in-house interview printed in part in the back of the issue. "Having them running around and talking to each other. Sometimes that's more vital than the smashing and the pounding. You have to embrace both. You have to be able to act in Shakespearean plans and Sylvester Stallone movies."

We've had a lot of Stallone movies of late -- even before the New 52 relaunch, there had been more or less a never-ending series of high-action stories since War of the Supermen. Getting a few quiet, character moments -- a little Shakespeare, so to speak -- certainly can't hurt. 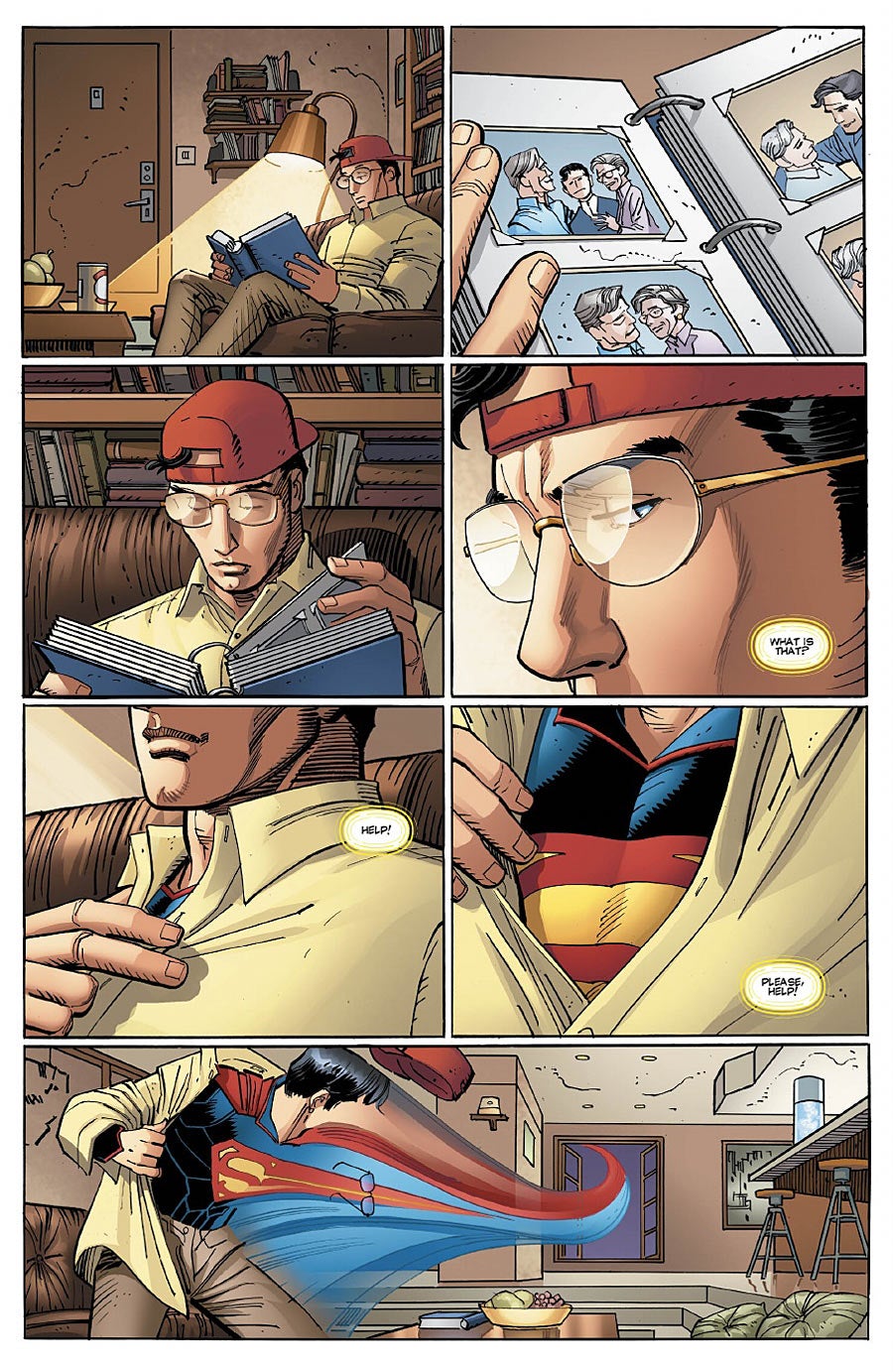 Johns, of course, is a writer whose characterizations are very human -- almost too much so, as some readers accuse him of bringing their heroes down a bit. It will be nice to see some of that humanity playing through the title, especially after Scott Lobdell's run on the comic, which alienated Superman from humanity as much as he's been in recent memory. The constant stream of Kryptonian imagery, threats and storylines may have played nicely off of Man of Steel but it did little for a Superman title that had struggled to find its identity, shedding two all-star creative teams in its first year and a half or so.

And, yes, it's difficult to review this issue without also considering the title's history. Launching with George Perez, handed off to Dan Jurgens and Keith Giffen, then on to Lobdell...it's a book that has seen some of the most notable and respected talents in the industry come through it, and fail to really capture the fans' imaginations for one reason or another (although I maintain that both the Perez and Jurgens material is underrated). Bringing on Johns and Romita, Jr. seems like a Hail Mary pass: Okay, so every other all-star has come up empty, let's put the MVPs of both leagues (I'm mixing my baseball and football metaphors) on the title together.

It seems likely to pay off, even if this first issue isn't the explosive start many readers will have hoped for. Perry White is compelling, Clark Kent is likable for the first time since Jurgens and the mysterious antagonist hiding in the background is...well, mysterious. The biggest question of the issue comes from what seems like a throwaway line from the hooded figure. 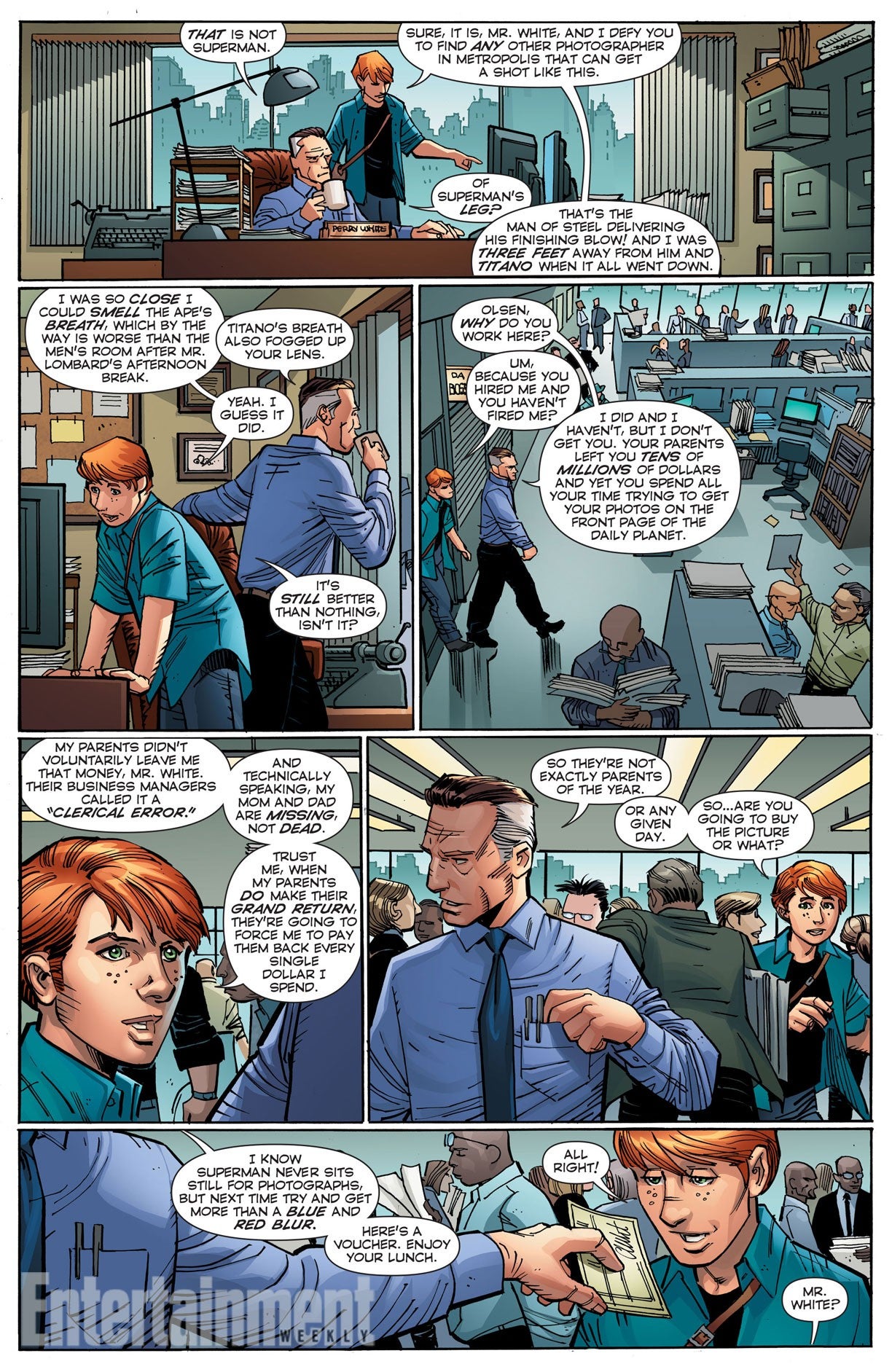 Jimmy Olsen also has a role to play for the first time since Grant Morrison's Action Comics run and it's well-handled. The idea of making him somewhat more of a contemporary of Lois and Clark rather than a glorified intern or gopher was always appealing but it flew in the face of years of history. Here, he's a freelancer, and so it can rejuvenate him a little without taking away his dignity. He's very much Peter Parker as he squabbles with Perry over pay for his freelance work and then, upon receiving it, resigns himself to the fact that it won't be enough.

The issue's art is, of course, more worthy of discussion than in nearly any big plot-driven book you'll read this year. Romita's first DC work is widescreen, beautifully paced and while preview pages raised a little concern about Laura Martin's colors -- particularly in that the flat style she has here doesn't really fit well with art we've seen elsewhere in the New 52 on Superman's "armor" -- in the context of the story it works well...and it's hard to picture the heavily textured colors we've seen in this book in the recent past translating well to Romita's style.

His thick lines and big, blocky figures work very well for the kind of story he's telling here -- there are gods, monsters, aliens, robots and monkeys in this first issue alone -- and in spite of a Superman that's much more substantial than the waifish look we're accustomed to from Kenneth Rocafort, Romita's action scenes have a kinetic quality to them that makes Superman feel as fast and lithe as he should.

Romita's non-costumed characters are also suited to a newsroom -- they all look casual and a bit frumpy; Clark doesn't seem out of place of ill at ease with a backwards cap on, for instance, and Perry's gut hangs out over his belt in the same way it does for most reporters I know.The earnestness and honesty in his eyes when he's delivery the "father-son speech" to Clark in this issue helps sell Romita's frequent, modest observation that he's a better storyteller than a draftsman.

The bottom line: A well-worn premise keeps the issue from feeling as fresh as we might like for such an important debut, but Johns's pacing and characterization carry the day writing-wise, turning out an issue that's a fast, fun read and delivers a lot of information without feeling like it's all about the exposition. Romita's first DC work could stand shoulder to shoulder with just about anything he's done in his long, distinguished career and if he can maintain this level of quality, this will quickly become one of DC's best monthly titles. 9/10