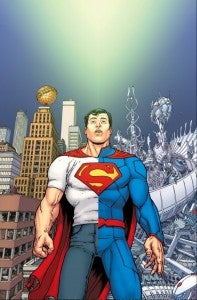 DC has just posted this look at Batman Inc. artist Chris Burnham's variant cover to Action Comics #7, featuring the t-shirt-wearing, Grant Morrison-written Superman literally torn between two worlds--on the left, Metropolis and his t-shirt and jeans, Bruce Springsteen-as-a-superhero look and on the right, the Kryptonian leather armor costume currently being featured throughout the rest of the DC Universe. "I LOVE the bottled city of Kandor," Burnham told The Source. "A few years ago I was at the Carnegie Museum of Natural History in Pittsburgh with my then-3-year-old nephew, Noah. We stumbled upon this incredible sculpture exhibition by the late great Mike Kelley. The exhibit is simply called 'Kandor' and features dozens of astounding renditions of the bottled city. Google it. It's amazing. And well worth tracking down in person if you get the chance. It was my favorite part of the museum and it was Noah's too! I literally had to drag him out of there kicking and screaming after we'd spent almost an hour in there. Kandor love runs in the family!" The issue hits in just under a month, and the pair return to working together on Batman Inc. on May 23.

Superman to Finally Get His Costume in Action Comics #7?

Bryan Danielson Reveals Why He Won't Use Catchphrase in AEW