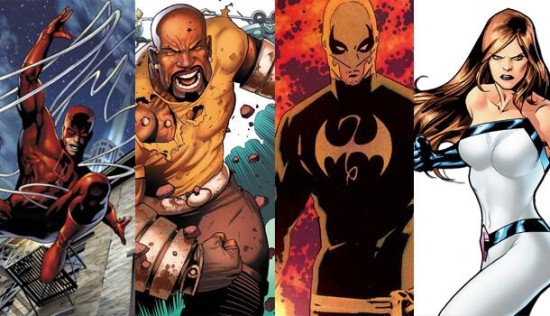 While we've got new "universe" movies coming from both the X-Men and Spider-Man universes, arguably the most unexpected announcement made in recent memory was that Marvel Television will bring The Defenders--in the form of four, one-season TV shows leading to a final, one-season series that will team Daredevil, Luke Cage, Iron Fist and Jessica Jones--to Netflix.

We've talked in the past about what we hope to see from the individual series, but for The Defenders itself? What will make it work?

Not Joss Whedon himself, of course. He's working on Avengers: Age of Ultron and the Marvel Cinematic Universe's second creative phase right now and even if he weren't, it's hard to picture him taking basically a demotion from "showrunning" the movies to doing so over a TV series for the same company.

Still, we need a strong showrunner on Defenders but more than that, we need somebody whose voice is both respected and reasonable--somebody who can unite the other strong showrunners that will be on the four series that come before this and not make it seem like s/he's second-guessing them.

Ideally, in the Whedon vein, it should be somebody who's both familiar with the content and who has a cinematic voice all their own that can guide The Defenders and help inform how the other showrunners develop some or all of the other characters. Saying, "Well, I'm writing this for a Kevin Smith show in the long run" would give a definitive tone to shoot for, or at least accommodate or avoid contradicting, in the early volumes.

We're not necessarily suggesting Smith. His is just a name that came up because it made sense with the rest of the statement.

Look, The Avengers was great for what it was, but this is a very different team. One-on-one or so, The Avengers all acted like The Avengers while as a group they started to sound as pithy as any other group of three or more in any other Joss Whedon show. The shorthand for it in interviews was that they were real people, like the Giffen/DeMatteis Justice League, and there's an element of truth to that...but it's not the only way to depict a bunch of people with disparate goals and personalities who end up working together.

After all, how many of your work friends have ever thrown down with you physically over a policy disagreement? Or had a sustained conversation that was almost all witty banter rather than content?

This can be applied to any of the individual shows, but it's particularly true for the team-up movie that casting is everything.

Not only do we need individual actors who work well as Daredevil, Luke Cage, Iron Fist and Jessica Jones--but we need an ensemble that works well together, which is difficult to keep in mind when you're crafting the initial series that will build to The Defenders.

Again, this is exemplified by The Avengers. Marvel Studios's "house style," where wildly different character types and story types can fit together in one film as long as the world they inhabit is well-enough-defined and the characters "look" right together.

Don't try to do too much

Alright, so you've only got one season for each of these characters, plus a season as The Defenders. You know what that really means? You've got 52 hours to tell these stories. Resist the urge to make the lead-ins slow and then cram too much into The Defenders. The Marvel Universe is at its best when things are moving, when the threats are imminent and the action (or comedy, or character beats, whatever) doesn't let up. If you make four seasons of Agents of S.H.I.E.L.D. before trying to make The Avengers, nobody will care by the time you start doing the stuff that "counts."

Pacing, in other words, is key--and the best thing to do with the main series is to make it very plot-driven. You've got 13 episodes EACH to develop the characters and their worlds; the more of that you put off until the final series, the more you're going to alienate people who want The Defenders to fulfill the promise of being "TV's version of The Avengers."

Get it together quick

Once these series start to hit, we want to see all of them--and especially the team-up--happen in a fairly reasonable time frame. And while the other four can all go into production more or less simultaneously, thus avoiding any delays that aren't built in for dramatic or economic reaons, The Defenders needs everybody, which means they need everybody's solo shows to be over.

The best thing to do would be to produce everything more or less at the same time and the use the two years or so whiel you're staggering the seasons' release dates to put The Defenders together. That way, it's no slower than any other of the movies and everybody's happy about the release calendar.

The Defenders On Netflix: Five Things We Want To See